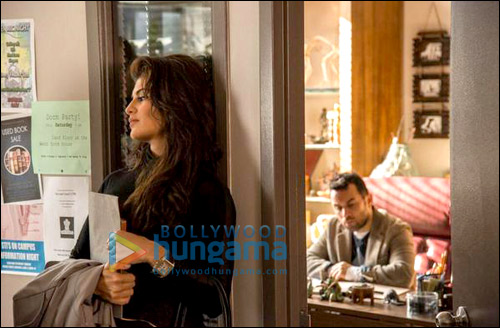 Being a former beauty queen of Sri Lanka, Jacqueline Fernandez never restricted herself to Bollywood projects and she grabbed the opportunity to act in an international film when she was offered Definition of Fear, directed by renowned documentary filmmaker James Simpson.

The actress, in fact, recently gave a glimpse of her look in this picture taken on the sets of the film. Though her look is fairly simple considering that she will be playing the role of a psychologist, in this shot, we spot the actress contemplating something deeply.

Apart from this, yet another picture of the film, has the actress along with her co-stars Katherine Barell, Mercedes Papalia and Blythe Hubbard, screaming in fear.

From what we hear, Jacqueline Fernandez, who has done action flicks like Race 2 and Kick in Bollywood, will be doing her own stunts in this film. In fact, it is being said that though she had been given the option of using a bodydouble, she refused it.

On the Bollywood front too, Jacqueline will be doing a double role in Roy which stars Arjun Rampal and Ranbir Kapoor. She will also be starring opposite Tiger Shroff in Remo D'Souza's next directorial and she will be doing a cameo in Excel Entertainment's Bangistan along with Riteish Deshmukh and Pulkit Samrat.
Tags : Check out, Definition of Fear, Jacqueline Fernandez, Katherine Barell, Mercedes Papalia, Roy