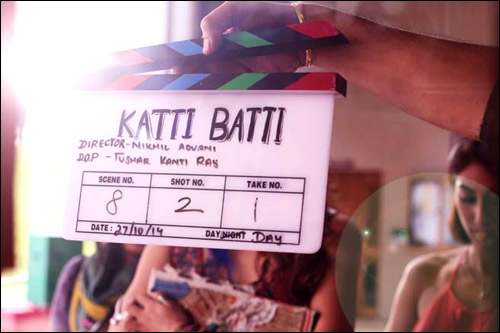 Just a day ago, we got to see Kangna Ranaut in a double role in her upcoming film Tanu Weds Manu 2 and now, yet another film of the actress has kick started in Pune.


Kangna Ranaut will be a part of the rom-com that will be directed by Nikhil Advani titled Katti Batti and for the first time we will see her romancing the chocolate boy Imran Khan. Though the announcement was made about couple of months ago, just a few days ago, Katti Batti went on floors in Pune. Here's the picture of the 'mahurat' shot of the film.


According to the makers, the film is a take on contemporary romance and we'll get to see a broad minded, urban couple who are in a live-in relationship. While the two meet in an arts school, the film talks about a clash between the worlds of these different people and how they try to sort out their differences that arise in their relationship. Imran Khan plays the role of a simple, middle-class, Maddy and Kangna portrays the role of a wealthy, straight forward, modern Payal.


Produced by UTV, Katti Batti is slated for release in the year 2015.