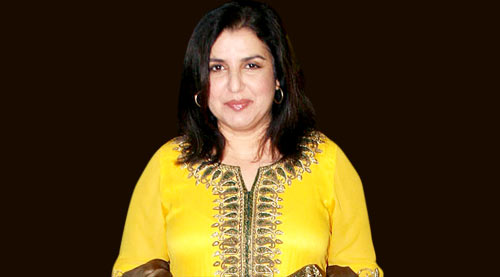 "I definitely think Jaya ji should take some action against them. She is getting maximum flak for how can she say about her son's movie in which her son is being liked so much," said Farah Khan in a Bollywood Hungama exclusive video interview with Faridoon Shahryar. Khan was livid with the manner in which Jaya Bachchan ji's recent statement at the Literature Festival in Mumbai has been selectively picked up by a certain section of the media and presented in a complete contrast to what and how it was said. Let's bring you Farah Khan's first reaction.

Jaya Bachchan ji's statement at the recent literature festival was selectively extracted by a certain section of the media and presented rather ominously. Several other media houses blindly presented the same version without looking at the actual footage. Would you guys like to sue certain media houses?

Jaya ji definitely should. It's her name that's being maligned. She is getting the maximum flak from this statement. At Shah Rukh's birthday party, she said that she enjoyed the movie thoroughly. She said, after Amar Akbar Anthony, Happy New Year is the most nonsensically entertaining movie (which I didn't understand what she meant), but being compared with Amar Akbar Anthony I took it as a compliment. I am sure when Amar Akbar Anthony released it must have been called a nonsensical movie and now it's cult classic that we all refer to as quintessential Bollywood. I don't know what was selected (out of Jaya ji's statement) and one word was selected but I think Jaya ji should be suing them for sure.

It has become very dangerous. Earlier we had this view that press interviews may be misquoted and hence one must do television interviews. But now, they are selectively taking sentences. We all have to be careful in what kind of words we use because it is a very dangerous game now. I definitely think Jaya ji should take some action against them. She is getting maximum flak for how can she say about her son's movie in which her son is being liked so much. It is embarrassing for everybody when she's being misquoted like this.


Have you spoken to Abhishek after this controversy broke out?

Yes I spoke to Abhishek. It was very embarrassing. Now that the whole video is out, they (Bachchans) should definitely take a stand and sue whoever has done this mischief. It is not merely irresponsible, it is dangerous. It can break relationships of years. It can bring irreparable harm to our movie and their son.


In this day and age of social media, the selective misrepresented truth has reached millions, not merely in India but all across the world.

A lie travels twice round the world while the truth is still trying to wear the pants. It is a very dangerous trend. We ought to be very careful with what we say and what words we use.


All these features in tabloids detailing celebrities who let down their family members taking a cue from Jaya ji's statement is a testimony to the fact that there seems to be some sort of negativity. You guys have been extremely cordial with media during the course of the promotions of the film. Why this negativity then and that too without checking facts?

If you want everyone to like you, then say nothing, do nothing, and be nothing. The minute you're going to become bigger than what you are, the minute your movie does better than what they think it should, the minute you're going to become bigger.. there will be negativity. The only way to counter negativity is with positivity. I always say that, when I am going for my shoot in the car, there will be some roadside dogs that bark behind, are we going to get down and shout at the dogs. You have to ignore, they are dogs, they'll bark. You sit in your air-conditioned car, make your movie and go back to your family.