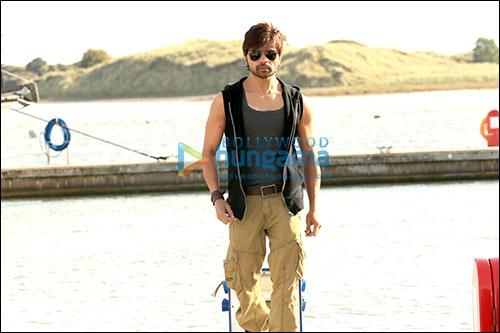 Himesh Reshammiya's new six pack look for Teraa Suroor 2 which was recently released on Twitter has got tremendous appreciation from all over. Teraa Suroor 2 is produced by T series and HR Musik, the music of which will be released next month end also is a landmark and every song is a chartbuster according to reliable sources.

Teraa Suroor 2 releases on March 11, 2016 boasts of an extremely interesting supporting cast and has Naseeruddin Shah, Shekhar Kapoor, Kabir Bedi, Shehnaz Patel and Monica Dogra in pivotal roles besides Himesh who is paired opposite Farah Karimi in this this musical action thriller directed by Shawn Arranha for which the entire cast recently completed the shooting in Dublin.

Himesh's last release The Xpose was a success and now Himesh is keeping his fingers crossed for Teraa Suroor 2 to be a hit as well.