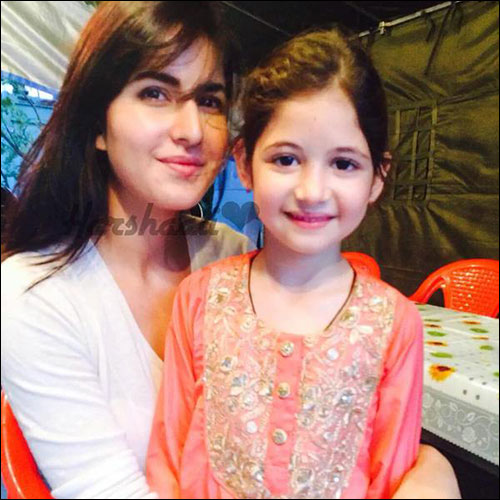 Salman Khan's latest discovery Harshaali Malhotra who made a mark on the big screen with her heart touching performance in Kabir Khan's Bajrangi Bhaijaan, recently had a fan moment of sorts. While she enjoyed a great deal with her co-stars Salman Khan and Kareena Kapoor Khan during the shoot of the film, the child actor was equally excited to meet another popular Bollywood actress Katrina Kaif.


In fact, recently a picture of Katrina Kaif and Harshaali Malhotra has been doing the rounds on various social networking platforms. Previously in an interview, Harshaali had stated that she always dreams of becoming an actress like Kareena or Katrina, both of whom she admires. Now, it seems that the little six year old got her wishes fulfilled when she met Katrina Kaif on the sets of Bajrangi Bhaijaan. From what we hear, Katrina Kaif, who is playing the leading lady in Kabir Khan's next Phantom, had visited the sets of the Salman Khan starrer when the team was shooting for the song 'Aaj Ki Party' at Yash Raj Studios in Mumbai.


Produced by Sajid Nadiadwala in association with Disney UTV, Phantom also stars Saif Ali Khan and is slated to release on August 28.