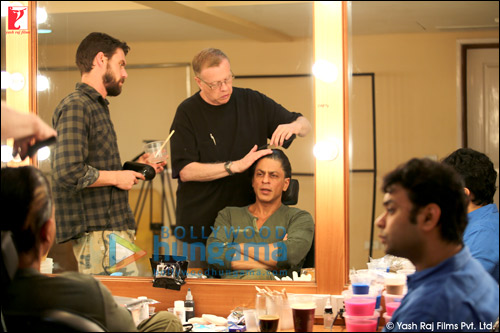 Shah Rukh Khan, the man unarguably with one of the greatest fan following globally, will now play the role of being the biggest fan himself in the forthcoming YRF movie, Fan. The film begins shooting on July 2014 and the actor has begun work on the film.

Greg, who really doesn't need an introduction, has been nominated for nine Academy Awards and has won an Oscar three times for the memorable looks he created in The Curious Case of Benjamin Button (2008), Mrs. Doubtfire (1993) and Dracula (1992), apart from several other prestigious awards. In 2005, along with Wesley Wofford, he received a Technical Achievement Award from the Academy for the development of special modified silicone material used for makeup applications in motion pictures.

Speaking about the look, Maneesh said, "We are attempting a never-seen before look for Shah Rukh which will be both challenging for us and exciting for the viewer. Understandably, this will be kept under wraps till the first look of the film is revealed."

Directed by Maneesh Sharma and produced by Aditya Chopra, Fan has been written by Habib Faisal, and goes on floor mid-2014. The film releases worldwide on August 14, 2015.

Alia Bhatt looks like a dream in white as…