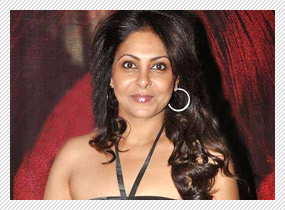 Her role as the hard-hitting dirty-talking Madame of a brothel in Nagesh Kukunoor's Lakshmi has shocked her fans and stunned critics. No actress in living memory has been part of such explicit sexually dialogues and graphic depiction of sexual violation ever before.


But then Shefali Shah, masala movie-maker Vipul Shah's better-half, has always been a fearless actor who likes to surprise both herself and the audience.


Shefali admits she had to cross self-imposed limits of censorship and her inbuilt code of morality to play this character in Lakshmi.


"It wasn't easy at all. But when Nagesh Kukunoor came to me with the one line about the child prostitute I knew, I had to do the film. I had to be part of something as brave as this," says Shefali who was last seen in the film Kucch Luv Jaisa three years ago.


The problem was the graphic nature of the dialogues and visuals of sexual violence. Shefali says she had to work on getting over her inbuilt inhibitions. "I had to stop thinking and reacting like Shefali Shah. I had to look at the situations in the script as Jyoti, the brothel runner. For her mouthing the filthy words commanding the sex workers to get on with their jobs are as natural as a housewife telling the maid, 'Put the rice in the pressure cooker off after 4 whistles.' She's doing a job. It has nothing to do with me."


Says Shefali, "There was that one dialogue which I just couldn't bring myself to say. Nagesh was amused. He said, 'Kamaal hai. You've gone through scenes of the most gruesome torture and violence. And now you can't say that one line.' I had to completely stop thinking and reacting as myself and get into my character's head to say the lines. The truth is, women like Jyoti do exist. She has a daughter around the age of Lakshmi (the film's 14-year old protagonist) and yet she pushes Lakshmi into hardcore prostitution. Then there comes a point where she says, 'Ab bas bahot ho gaya.' And helps the girl to escape."


What follows is Shefali's character's gruesome torture where the pimp inserts lit cigarettes into the Jyoti's private parts.


Says Shefali, "Ram Kapoor (who plays a lawyer in Lakshmi) was sitting next to me. He couldn't watch the sequence. My husband Vipul Shah when he saw the film had another take. He said I had underplayed the Madame's role. But it was important for me to create my own character unlike any 'Madame' seen in our films. Jyoti had to be very different from Shabana Azmi in Mandi, Shaukat Azmi in Umrao Jaan and Dina Pathak in Mausam. Nagesh Kukunoor did not want me to use any reference points to play my character. She had to be who she was because of her own circumstances."


Shefali created a back-history for her character in her own head. "I had to strip myself completely naked emotionally. There was nowhere for me to run to. My character didn't allow me any escape routes."


Shefali admits the role such as the one in Lakshmi are hard to come by. "I am not holding my breath for such opportunities. Neither am I going to grab anything that comes my way. Luckily for me I've a life beyond acting. My two sons and my husband and home keep me very busy. If they weren't in my life I'd probably have grabbed everything that came my way. I am content doing the work that I want to."


Shefali will next be seen in Mira Nair's short film Words With God. "It's an international project where Mira Nair along with other distinguished filmmakers such as Serbian filmmaker Emir Kasturica, Australian director Warwick Thornton and Kurdish director Bahman Ghobadi have made short films. I had earlier collaborated with Mira in Monsoon Wedding which remains one of my own favourite films."


Shefali's two sons aged 11 and 14 remain oblivious to their mother's acting talent. "They can't see me in Lakshmi for obvious reasons. My other good performances are also in Adult films such as Monsoon Wedding, The Last Lear and Satya. My sons are like, 'Mom, what do you do besides cook?'. Quite frankly I am happy to be a wife and mother."


She is against her husband Vipul Shah producing films for her. "We are both part of the production house. To me it's important that his films do well, whether I am in them or not."