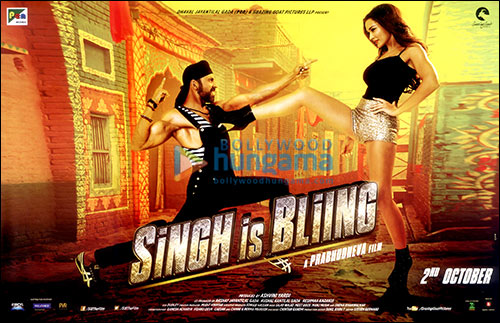 For the past couple of days or rather weeks, the media and social network has been buzzing with images or tracks from the soon to release Akshay Kumar - Amy Jackson starrer Singh Is Bliing. However, we at Bollywood Hungama managed to get our hands on a deleted poster of the film that will never see the day light.

Though the reason for this creative being denied approval to feature among the film's posters is unknown, unlike the previous images that featured the three different sides of Akshay Kumar's character, this one simply features Amy and Akki in a rather unconventional pose.

As for the film, Singh Is Bliing follows Akshay's character Raftaar Singh, who is always looking to have fun and runs away from responsibility. Sent to Goa to work for his father's friend, Raftaar impresses his new boss with his enthusiasm and out of the box thinking, landing an important assignment from himself where he meets Sara (Amy Jackson) and thus begins their unique love story.

Produced by Pen India Pvt. Ltd and Grazing Goat Pictures Singh Is Bliing that stars Akshay Kumar, Amy Jackson and Lara Dutta among others and is directed by Prabhu Dheva is slated to release on October 2, 2015.