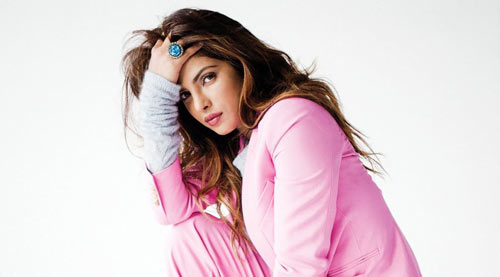 "I would like to move the court to stop these men from wearing pants because I don't think they are man enough to stand up for the real issues, stop deflecting and start defending the women of the country," said Priyanka Chopra responding to the blasphemous comment from Akhil Bhartiya Hindu Mahasabha that's planning to move the Supreme Court to equate item girls in Hindi movies with prostitutes. "Can I tell the court that don't let such men wear pants, make them wear skirts because they are behaving like girls. It is stupid. It's like saying that if a girl is wearing a small skirt then she should be raped. No, a girl is raped because a man raped her. It is as stupid and regressive as that. Anyone can move the court for anything these days. It's bizarre," Priyanka said.

The recent rape of a 27 year old girl by a cab driver in Delhi has once again sent shock waves within the country. Reacting to the ghastly incident, Priyanka said, "It worries me. It's high time, women are respected. Men in the country need to change their mindset. That's very very important. They need to start thinking that women are not just for pleasure, sex or taking care of the kitchen. We are human beings as much as men are. The mindset that has been prevalent for so many years it needs to start changing with education, with awareness. People need to start standing up for women in the country."

Noted columnist Swainathan Aiyar wrote in his widely read column 'Swaminomics' on Sunday December 7, "Bollywood is much more efficient than the Indian state. Actually, the greatest integrating agents in India have been cultural icons like Raj Kapoor, Lata Mangeshkar, Shah Rukh Khan, not any political figure." Priyanka responded to Mr Aiyar's Big statement by saying, "That's a great way of looking at it. The names that you've taken have always had huge social responsibility towards the people who look upto them. As public figures, actors (female and male) should be given their due and not just seen as easy targets to be pulled down because they make news." Does it worry you that in spite of the immense contribution of Bollywood; it is sometimes referred to in a frivolous manner? "Bollywood is referred to as frivolously sometimes. If you take the name of a big star you get headlines. If you don't take the name of a star then you'd get a third page or maybe a small mention. It is easier to take the name of Hindi cinema and get publicity," Priyanka said.