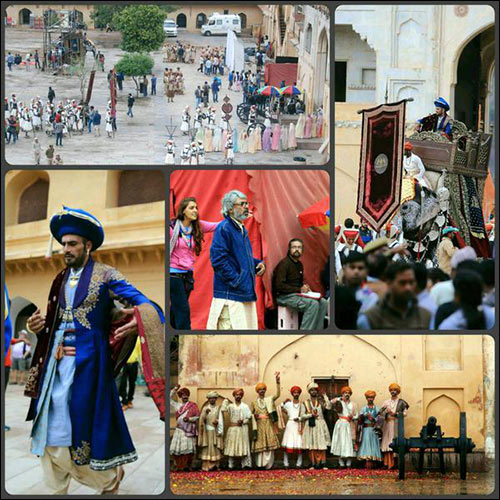 Amongst all the films that's to be released this year, Sanjay Leela Bhansali's magnum opus Bajirao Mastani is one of the most awaited films. The film stars the trio of Ranveer Singh, Deepika Padukone and Priyanka Chopra and considering the era the film is set in and its budget, it has been making news ever since its inception. However, knowing Sanjay Leela Bhansali's love for perfection, everything about the film is closely guarded. The only thing that we know (besides the film's star cast) is that, Ranveer had to shave his head for 'getting into the character'.

Bollywood Hungama got its hands over an image from the sets of the film, which has Ranveer's body double (who is a look alike of Ranveer in many ways) sporting a royal blue colored robe, with a Peshwa hat to go with it.

If the looks of the film's image is anything to go by, then, it's not rocket science to say that, Sanjay Leela Bhansali definitely has a winner in his hands in the form of Bajirao Mastani.

Bajirao Mastani is co-produced by Sanjay Leela Bhansali and Eros International and is being readied for a December release this year.