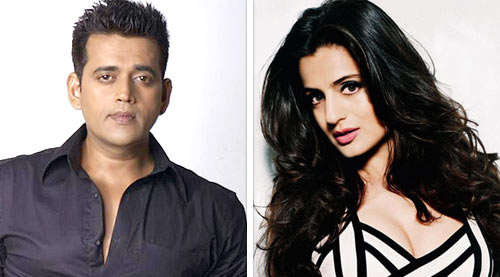 Apparently, Kishan took off for three months to fight the Lok Sabha elections, while Ameesha and the Desi Magic team twiddled its thumb.

Says Ameesha, "Ravi was stationed in his constituency during the elections. Obviously, he couldn't shoot for us. That did slow us down. So did the fact that our leading man Zayed Khan tore a ligament in his leg, and Randhir Kapoor, who plays an important role, took off on a holiday."

But, Ameesha isn't complaining. "We are in no hurry to release Desi Magic. As the name suggests, there's a magical quality about the film. Our film has the innocent romantic charm of Karan Johar's Kuch Kuch Hota Hai and my own film Kaho Na...Pyar Hai."

Ameesha feels commercial mainstream cinema has lost its innocence. "We either have the Dabangg kind of action films or the cheesy kind of comedies that no family can watch together. We feel Desi Magic brings back the pleasure of the rom-com."

Ameesha, who saw great success in the initial stage of her career, has been going through a slump period. She is hoping to revive her career with Desi Magic.

Says the actress, "A lot of our cinema today looks like an extension of television. Why would the ticket-buying public pay to see on the large screen what they already have at home? No! Desi Magic will hopefully revive the magic of the movies. Like I said, we're in hurry to release. We will release only after the school examinations and the IPL are over. Our film is for an audience from the age of 6 to 60."