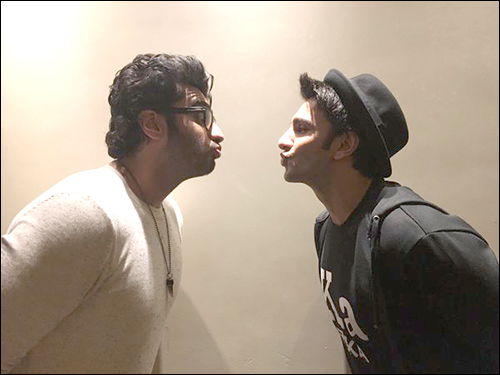 While recently the entire Bollywood fraternity came out in support of Ki & Ka with celebrities posting selfies with their respective Kis & Kas, we would have expected Ranveer Singh too to pose with his Ki. But guess the actor is still in his Gunday mode and decided to revive his bromance with Arjun Kapoor for the latter's upcoming release.


This picture of Ranveer Singh and Arjun Kapoor's blooming bromance was posted by filmmaker Gauri Shinde, who is also the wife of R. Balki, the director of Ki & Ka. Sharing this picture, she added, "Streeling pulling same thing! #Ka&Ka for the love of #KiAndKa @arjunk26 @RanveerOfficial". In response to the image, Ranveer too took to Twitter to talk about it saying, "Most Wanted GUNDA bana Most Wanted MUNDA! So proud of my baba @arjunk26 ! Charming! Endearing! Cuteness ka vullcano! #KiAndKa #feels Omg! The leaked poster of #Gunday2 !"


Ki & Ka also stars Kareena Kapoor Khan, as Arjun Kapoor's Ki along with Swaroop Sampath, Rajit Kapoor and others. The film has Amitabh Bachchan and Jaya Bachchan doing a cameo and is slated to release on April 1.