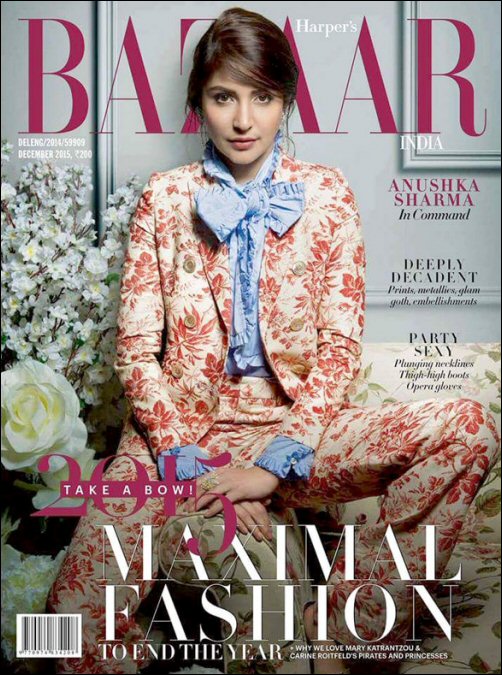 Looking back, it was a rather interesting year for Anushka Sharma whose debut film as a producer, NH10, received a lot of

acclaim. However, on the other hand films like Bombay Velvet and her relationship becoming the fodder for media gossips did not really run in favour

of the actress. With her latest interview on women empowerment and nitty gritties of the film industry gaining popularity, Anushka Sharma also turns cover

girl for the December edition of Harper's Bazaar India.


Unlike the theme of autumn season, the cover of Harper's Bazaar has a spring look with Anushka Sharma adding colour in her floral suit, blue shirt and

matching bow tie from Gucci as she accessorizes it with earrnings and ring from Nirav Modi jewellery. Hair tied and light make-up along with those stylish

For a photoshoot for the same magazine, Anushka Sharma yet again opts for a formal chic look. The actress is seen in a honey silk wool crepe jacket along

with matching pleated skirt from the Gucci New York Cruise 2016 collection. In fact, she even opts for the black ribbon bow from the collection pairing it

up with studs and ring from Nirav Modi.


The magazine that gives you a recap of some of the most popular fashion trends of 2015, also includes a candid chat with the actress who is gearing up for