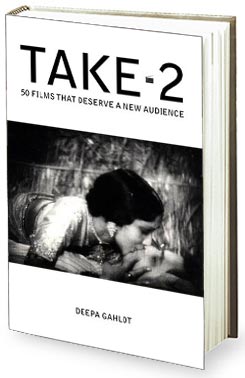 Well, noted author Deepa Gahlot brings to fore 50 such films that may not be remembered too strongly today, but presumably carry good enough content to be appreciated even when seen in the current times. A noble thought indeed, considering the fact that just to compile 50 films from between 30s and the 80s would be a task in itself. More so, when there is hardly much of content available online, either literary or on videos.

In any case, Deepa's core idea must have been to dig deeper down into these films, instead of just fishing what is already available via Google search. From that perspective, she deserves a huge compliment for actually exploring a subject that doesn't have much of a precedence. Yes, some of the films that she brings to the fore in her book Take 2 - 50 Films That Deserve A New Audience may have found a reference or two in many other write ups that have been put together by the historians. However, when it comes to mainstream books on the shelves, not more than a passing comment or two is available.

This is where Deepa goes much more than just a step beyond. She dedicates a chapter each on these 50 films and after a brief introduction, goes about narrating the story in very good detail. So much so that you gain a very good idea around how the script would have shaped up for these films. If this is interesting enough for those who really wanted to have a dekko at what these films had to offer, an even more interesting part are the details that Deepa shares around the attached cast and the crew attached. This makes for a very engaging read as you get to know about how their life and career went after these films.

There are certain stories that actually intrigue you into believing that content truly ruled in many an affair that was brought on screen even decades ago. One look at the core stories of Roti, Ek Thi Larki [1949], Prhtivi Vallabh [1943], Miss Mary [1957], Oonche Log [1965], Sadhu Aur Shaitaan [1969], Chakra [1981] and New Delhi Times [1986], to name a few, does make you truly believe that beyond the realms of quintessential Bollywood, there has been a plethora of variety that Hindi film industry has explored over the decades.

That said, the book is for a really niche audience, the ones who actually wish to go back into the past and explore the films that have been made by makers from many generations ago. Since Deepa keeps the narrative sans anything frivolous and the layout by the publishing house too is primarily business like, one does gain an impression of a rather dry read chapter after chapter. So while the introduction and the anecdotes do hold your interest film after film, when it comes to the detailing around the script, it boils down to the interest of that miniscule set of readers who are truly interested in the heritage quotient.

Of course at the end of it all, this 300 odd page is a collector's item, as it is the one to be preserved, and an initiative that could lead to the students of Hindi cinema check out if the films are available online to watch. However, one has to also acknowledge that the target audience for the book can't be expected to be really widespread.