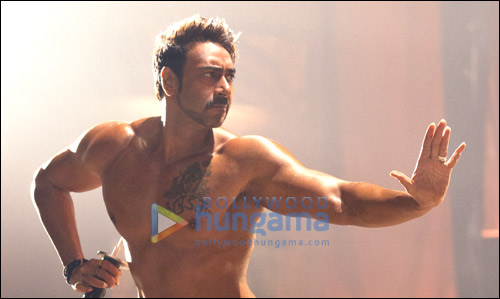 Ajay Devgn is rejoicing the successful run of Singham Returns which was received with open arms by the audience and critics just like the prequel Singham. With the film entering the 100 crore club, Ajay Devgn has decided to concentrate on his next project. He is now completely focusing on his next release Action Jackson.

Coming together with choreographer-actor-director Prabhu Dheva for the first time, Ajay Devgn will be seen in a physically fit avatar in this action thriller too. As it can be seen from the photograph, Ajay who got into a good shape for Singham Returns but hid it below his khaki uniform and white vest, decided to bare his torso this time around for Action Jackson. In fact, considering that he had to flaunt his abs, the superstar put himself on an even more electrifying exercise regime to get the look right.

In fact, post wrapping up the promotions of Singham Returns, we hear that Ajay Devgn didn't take even a day's break before getting on to the schedule of Action Jackson.

Action Jackson was ideally slated to release before Singham Returns. However, in order to avoid a clash, Ajay Devgn decided to push the dates of the film. Also, Action Jackson became a victim of controversy owing to its title since a Hollywood film by the same name was released in 1988. However, after a lot of discussions, the film is finally retaining the title and the actors are currently busy shooting in prominent locations of Mumbai city.