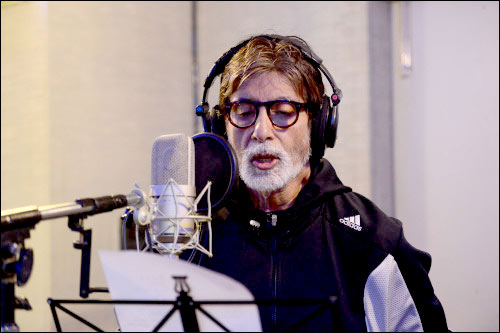 The megastar Amitabh Bachchan has a penchant for sports. While the father-son duo of Amitabh and Abhishek often make it a point to attend as many matches as possible, it is known fact that Abhishek Bachchan even bought Jaipur Pink Panthers, a team of Pro Kabbadi League which walked away with the trophy last year. Now, with the league once again approaching this year, Amitabh Bachchan has decided to lend his voice for it.

The veteran star decided to croon for the promotion of Pro Kabbadi League. Uday Shankar, CEO of Star India Pvt. Ltd not only expressed his happiness over Amitabh Bachchan coming on board to promote the game but he also mentioned that their channels have decided to work towards the growth of kabaddi. On the other hand, Amitabh Bachchan took to his blog to post about his crooning session for the peppy number. Talking about the details of the song on his blog, Amitabh said, "The song has been written by Piyush Pandey, the iconic Advertising Guru and dear friend with whom I have done so many campaigns and it had been recorded as per the tune dictated by the channel.. I felt though that it was a bit slow keeping in mind the pace of the game and so I composed a faster version, and recorded it at my dear friend and music director Aadesh Srivastav's studio.."

Further he also mentioned that he has sung the song in different languages. He said, "There are therefore 4 versions sung by me - 2 original in Hindi and Marathi ad 2 my compositions in both languages..."