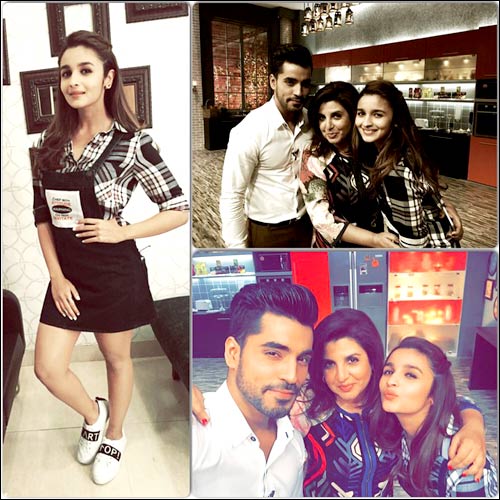 On the day her triplets turned a year older, the multi-faceted Farah Khan decided to start with a new reality show after ending her anchoring stint in 'Bigg Boss'. Titled 'Farah Ki Daawat', the show will have Farah Khan playing the host once again, while her celebrity friends from Bollywood will flaunt their culinary skills. Earlier, we reported about Abhishek Bachchan and Farah Khan shooting the first episode of the show.


Now, the choreographer turned filmmaker has posted a picture with the young Alia Bhatt who will apparently be making a Spanish omelet on the show. Lending a helping hand to the actress is none other than the recent Bigg Boss winner Gautam Gulati who is seen posing with Farah Khan on the show. Farah shared it on her Twitter page saying, "Super fun shoot of#Farahkidaawat.. Thank u @aliaa08 4 being such a sport n @TheGautamGulati 4 blushing so much."


On the other hand, Alia Bhatt too was excited to showcase her cooking skills and shared a collage of the happenings on the show on her Instagram and expressed her gratitude towards Gautam Gulati for helping her complete her favourite dish. She said, "FARAH KI DAAWAT !!! Thank you @TheFarahKhan for this "tasteful" experience ;) and @TheGautamGulati for giving me a HAND ;) hahaha watch out for the show coming soon only on @ColorsTV."


The show which will be aired on Colors channel will also have the celebrities indulging in a candid conversation with Farah Khan who promises to make the interaction spicier and tastier just like the cooking experience.