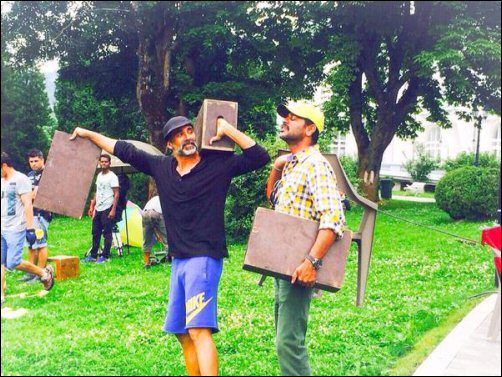 While we are well versed with the witty statements of Mrs. Funny Bones aka Twinkle Khanna, we also love the comic timing of her husband and superstar Akshay Kumar. The actor

too is known for his quirky sense of humour and we can get a glimpse of it on his latest Twitter post.

Akshay Kumar took to Twitter to post an image from the sets of his upcoming film Singh Is Bliing. The actor who is currently shooting at Romania along with cast and crew was seen carrying

props around the sets of the film, following the instructions of his director Prabhu Dheva. Talking about it, Akshay Kumar wrote, "Always b directors actor, b it acting, dancing or lifting props:)

Singh Is Bliing also stars Amy Jackson, Lara Dutta, Rati Agnihotri in a prominent role and is slated to release on October 2, 2015.