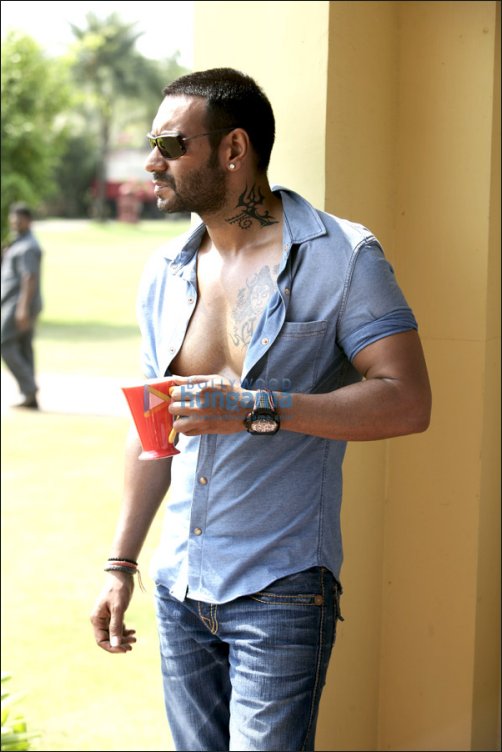 Golmaal 3 is the entire buzz. And the reason being, it's never-been-seen-before quality that the actors will bring to it. Everyone's going out of their comfort zone and doing something they have never attempted before. Where Kareena Kapoor will play a tomboy, Tushaar is playing the roadside 'Tapoori'; Ajay Devgan on the other hand has now revealed what he is bringing to this party.

We had seen the edgy styled Devgan in London Dreams, but what makes this look stand apart, is roughness around the edges. Not only is he now sporting a cropped look, and a diamond stud in his ear but he has also worked on his body and is planning to go all out to flaunt it, John are you listening?

What's really caught the attention is a certain tattoo that's doing the rounds, seems like celebrity tattoos are the statement of the season, remember Lara's? Well, Ajay is sporting a tattoo on his neck in this one, a first in Bollywood. No one's ever tried that and credit goes to Aalim's Studio, where Vishwas designed the tattoo but the concept and idea was all Ajay's. Says Aalim "The tattoo is of a Celtic or tribal trishul. It's daring to have a tattoo on the neck, even if it's temporary."

When it comes to the entire makeover, Aalim says "We have given Ajay the buzz cut, a stubble look overall, a more macho, masculine and grungy look than he normally sports." Ajay took a personal interest in his entire look, instead of leaving all on the stylists he actually got involved in the process. His clothes in the film will be styled by Navin Shetty.

The works have been done keeping in mind the character Ajay is playing. The credit for the same goes to director Rohit Shetty. Ajay is playing an extremely hyper character with a short fuse. He looses his temper at the drop of a hat and everyone is always scared of him. It's hard to figure what he would laugh or get angry about. Interesting! This is certainly new for Ajay. We wish him luck.