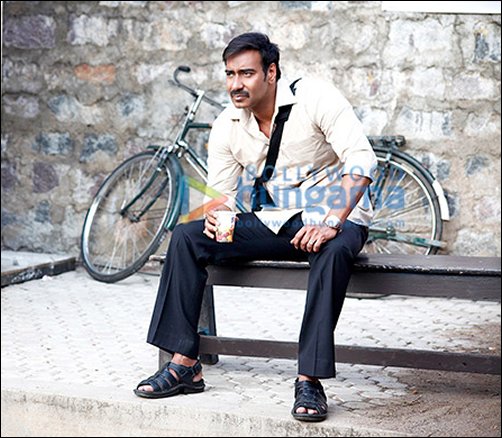 Last July, Ajay Devgn took the nation by storm in khaki as Bajirao Singham in Singham Returns. Now the actor has decided to experiment with roles out of his comfort zone. Earlier, we had reported that Ajay Devgn will be the protagonist in Nishikant Kamat's remake of the Malayalam blockbuster Drishyam.

Now, we hear that Ajay Devgn will play the role of middle class family man who can go to any lengths to protect his family from difficult situation. Here's a glimpse of the superstar in the film wherein unlike his stylish trendy avatar, Ajay is sporting a very simple shirt and pant with black floaters and a sling bag, sipping a cup of tea in a roadside stall. While he has portrayed the role of a sincere police officer a number of times, his role in Drishyam remake can be termed as a diametrically contrast one. The actor, in order to protect his family from the hands of law, even decides to take on men and women in khaki.