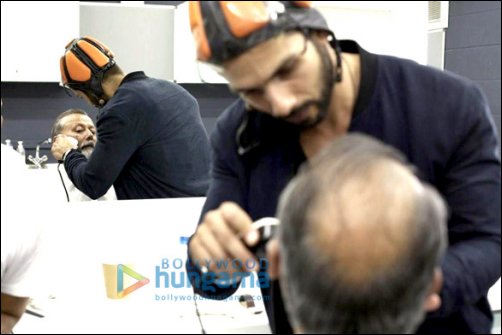 Vikas Bahl's next Shandaar has been in the headlines for its fresh pairing of Shahid Kapoor and Alia Bhatt. While the film commenced shooting a while back, Alia recently posted an image from the sets of the film on twitter. Tweeting the image of Shahid Kapoor trimming veteran actor Pankaj Kapoor's beard, Alia Bhatt said, "SHAANDAAR moment !!!! @shahidkapoor and Pankaj sir on set ;)"


Interestingly, besides from the first time pairing, the film also has many other firsts. It will see the father-son duo Shahid and Pankaj Kapur sharing screen space and also will mark the debut of Shahid's sister Sanah in Bollywood. Said to be one of the most expensive films based on a destination wedding, Shandaar is currently being shot in UK and later, will also have yet another schedule in India.