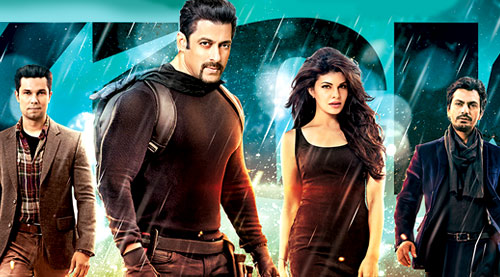 1.  Salmaniacs are Famished: Salman Khan's other release Jai Ho at the start of 2014 disappointed and enraged his fans. They are impatient for the Big Bang. Kick looks like something the Salmaniacs would like to feed on hungrily.

2.  Salman Khan as a Super-Hero: We've seen Hrithik Roshan as the caped crusader. We've also seen Shah Rukh Khan give the super-hero genre a try. Lekin Salman in a mask? Boss, too cool! 7-year and 11-year old kids are pointing frantically at the masked hero in the trailers waiting for him to fly. Boarding has just begun.

3.  Super-hero ka Super-Villain: Very rarely do desi super-heroes get adversaries to match. In Krissh 3, Hrithik Roshan had Vivek Oberoi who didn't quite match up as the man of the menace. Salman Khan has the formidable Nawazuddin Siddiqui as his foe. Going by Nawaz's evil laughter, the tussle between Good and Evil should be quite a sight. Right?

4.   'Jumme Ki Raat' Aa Gayi: For the first time in his career Salman Khan brings up the forbidden 'k' word. He actually talks about kissing his co-star. Blush blush! The song composed by Himesh Reshammiya is a rage. And Salman has never danced like this before. Choreographer Ahmed Khan has for once made Salman dance. Usually the choreographer says one thing, Salman does another. Ditto director.

5.  Jodi Ho Toh Aisi: Speaking of smooching for the first time, the co-star seems eminently kissable. With due respect, the girls Salman has worked with in the past from Aishwarya Rai to Madhuri Dixit to Katrina Kaif to Sonakshi Sinha have all been the kind you would take to temple or church or gurudwara or mosque (tick your pick) rather than a pub for a date. No doubt Kick is a new beginning for Jacqueline Fernandez. Mark my words, she will be seen with Salman again very shortly.

6.  Dur-dur Tak No Competition: Kick which according to trade experts is expected to do a business of Rs 250-300 crores, has no competition for the next two weeks after release when Akshay's Entertainment opens. It also has no competition from the films released during the earlier week. Plus, it has the long Eid weekend all for itself. Oh boy.

7.  The lethal Sajid Nadiadwala-Salman combo: From the time Sajid Nadiadwala produced his own version of Devdas named Jeet where he cast Salman Khan and Sunny Deol together for the first and last time, the Sajid-Salman combo has gone on to collaborate on Judwaa, Har Dil Jo Pyar Karega, Mujhse Shaadi Karoge, Jaan-e-Mann, all except one were blockbusters. Koi shaq? If the answer is yes, then what the....

8.  Daane-daane par likha khane waale ka naam: To think, Kick was to be directed by, ummm, Shirish Kunder, the man behind Sajid Nadiadwala biggest fiasco Jaan-e-Mann, not to mention Joker. It was Salman Khan who told Said Nadiadwala to take over the project and divert it from catastrophe to triumph.

9.  Action Hero Is Back: Salmaniacs would be happy to know that all the dangerous stunts in Kick are performed by the Khan himself. Two Eids ago, Salman's body double had a field day in Ek Tha Tiger and we could clearly see the other guy going at it. Back then Salman's neurological condition prevented him from doing the derring-do. Not any more. It's show-time, folks!

10.  Eid + Salman equals hysteria: Let's put it this way. Can Christmas work without Santa Claus? Would Salman Khan ever fail to create magic during Eid? Check the collections of Salman's Eid releases Wanted, Dabangg, Bodyguard and Ek Tha Tiger. Now let's get set for the Kickflick. Salmaniacs, put on your ceetee belt.