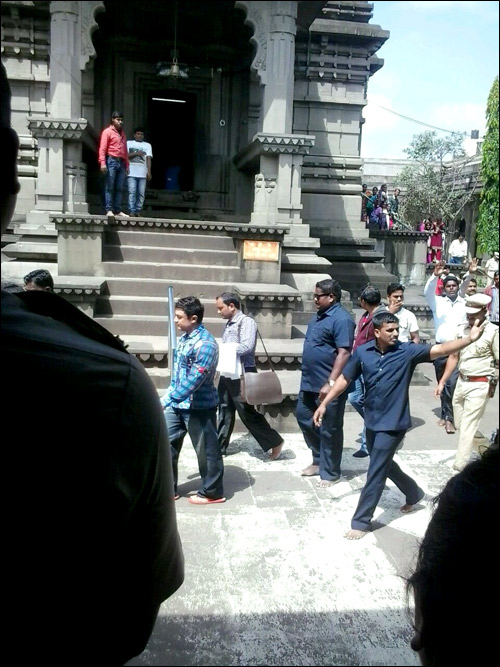 Aamir Khan certainly made heads turn with his dare bare act for the first poster of his next film PK. While the media and social network has been buzzing with activity, the poster also attracted a lot of criticism from certain people. The team of PK soon went into damage control mode and launched the second poster of the film; this time of course Aamir was dressed in a traditional outfit.


Aamir Khan is currently at Nashik to shoot for his upcoming film PK, directed by Raju Hirani. We came across these images of Aamir Khan visiting the Kalaram Mandir in the Panchavati area of Nasik.

However, latest reports suggest that a local group has taken objection to the actor's shoot scheduled at the location on the grounds that the said place is of historic and religious relevance and should not be used for film shoots.


Apparently Aamir was scheduled to shoot for his next film PK, which is directed by Rajkumar Hirani, and also features Anushka Sharma, Sushant Singh Rajput, Boman Irani and Sanjay Dutt. PK that is produced by Hirani, Vidhu Vinod Chopra and Siddharth Roy Kapur is slated for release this December.