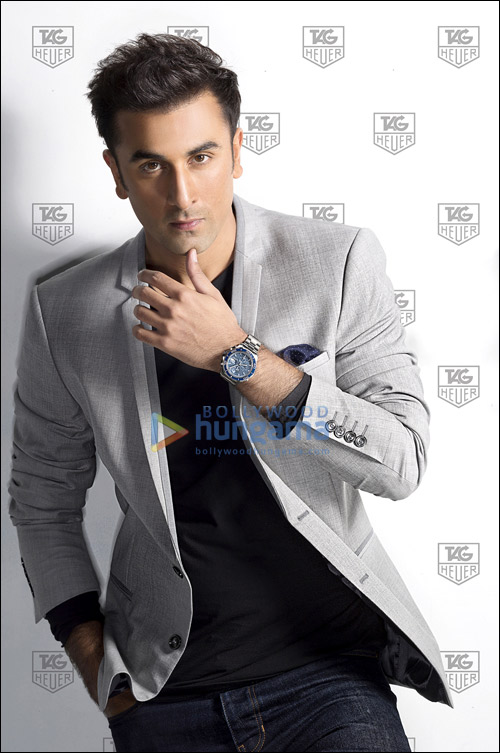 TAG Heuer, the leader in prestigious and high-end chronographs, is proud to announce the signing of Bollywood Superstar Ranbir Kapoor for a long-term partnership as a TAG Heuer Brand Ambassador. With this association, TAG Heuer reinforces its leadership position by becoming the only brand in the industry endorsed by two of the biggest names in Bollywood - Shah Rukh Khan and Ranbir Kapoor.

TAG Heuer recently unveiled its global campaign in India - Don't Crack Under Pressure. The Swiss Avant-Garde watchmaker is best known for breaking rules: harnessing mental fortitude to overcome technology restraints and deliver ground breaking innovation. Don't crack under pressure asserts the powerful truth that achievement is due as much to mental strength as to physical capabilities. A truth that is exhibited in the daring watches and chronographs produced by TAG Heuer.

"Far more than a claim, it is a powerful mindset," said TAG Heuer CEO Stephane Linder. "Those who know TAG Heuer may recognize the motto, a tribute to an early 90's campaign which for many remains the most archetypal expression of TAG Heuer's unbreakable determination. The campaign captures the mental strength of our Dream Team, athletes and partners, who reflect the values of the TAG Heuer shield. Be it Cristiano Ronaldo the perfectionist, Maria Sharapova the irresistible, Shah Rukh Khan the King of Bollywood or our latest ambassador Ranbir Kapoor the Bollywood heartthrob & Youth icon of today. In India, we are proud to have two of the best names in Bollywood sporting TAG Heuer and we see a great future with them in the coming years."

"TAG Heuer has always been one of my dreams," said Ranbir Kapoor. "It started when I was really young, it was the first watch I wanted to own in my life. I remember my parents gifted it to me on my 13th birthday. So now, to be associated with the brand is really humbling for me. I really have to pinch myself to believe that I am part of the TAG Heuer family. I think TAG Heuer stands for the four principle P's that is prestige, precision, passion and performance. I think that is something we all and especially I can identify with; the way I look at my career, my life. I believe these are very important aspects for how one should approach their life, their work and their relationships."

"While most people want to succeed in their time, a few succeed in changing their time. These exceptional individuals are called Time Changers," said Puneet Sewra, Marketing Director - TAG Heuer. "Being a 4th generation actor from the legendary Kapoor family, there are a lot of expectations one has to match. Not only did Ranbir live up to those expectations, he also successfully managed to carve his own niche in a short span and did not crack under pressure; and that is what makes him a Time Changer. We are very proud to have Ranbir join the TAG Heuer family and we look forward to a long-term partnership with him."