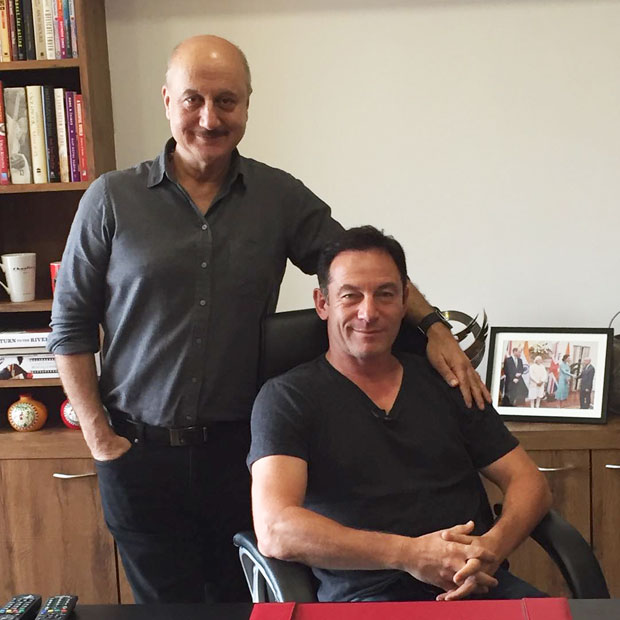 Over the years, Anupam Kher has worked with several actors and actresses in Bollywood and Hollywood. We had reported a few months ago that Anupam Kher was all set to star in his 501st film titled Hotel Mumbai which also stars Harry Potter actor Jason Isaacs, Armie Hammer and Slumdog Millionaire star Dev Patel.

It turns out that Jason Isaacs in currently in India and got a chance to reunite with his Hotel Mumbai co-star Anupam Kher. Anupam invited Jasoon to his acting school where they held a special seminar for students who are aspiring to become actors. Anupam thanked Jason for visiting his school with a photo and captioned it, "Thank You @jasonsfolly for your visit to our school @actorprepares & talking to students. Pleasure & an honour. #LuciusMalfoy #HarryPotter."

Jason Isaacs, who was extremely honoured, replied saying, "It was truly humbling in the face of their raw talent & enthusiasm and your 501 filmsworth of yoda-wisdom. One of them better give me a job."

The film Hotel Mumbai is based on a true story of victims and survivors of the 2008 terror attacks in Mumbai. Parts of the film will be shot in the south Australian city of Adelaide. The film talks about people of all races, colours and creeds binding together in a fight for survival. Apart from this, Anupam Kher will also be seen in Toilet Ek Prem Katha and Indu Sarkar.

EXCLUSIVE: "It’s probably the most beautiful…

Sugandha Mishra and Sanket Bhosale of The…

After Karan Kkundra’s interview on his break…