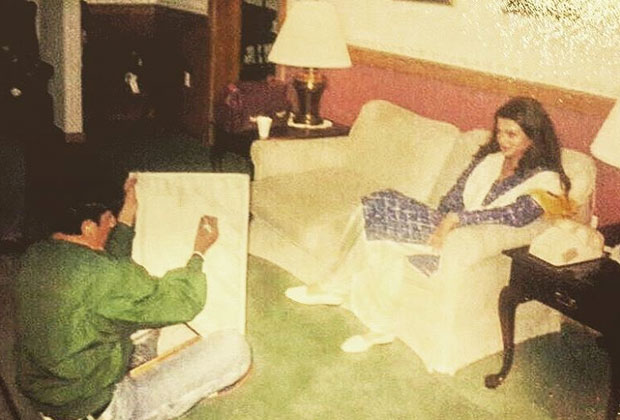 She has been a former beauty queen and has won the title of Miss World. Aishwarya Rai has been admired for her good looks not just in India but also worldwide. Her co-stars often can’t stop gushing about the same and Ranbir Kapoor too wasn’t an exception. He who played her live-in boyfriend in Ae Dil Hai Mushkil has been admiring her ever since he saw her working with his father Rishi Kapoor in Aa Ab Laut Chalein (1999).

Aishwarya Rai Bachchan played the leading lady in this Akshay Khanna starrer and Ranbir Kapoor who would often hang around on the sets of the Rishi Kapoor directorial, in his own words, had mentioned that he bonded well with her on the sets of the film. However, here’s a rare picture that talks about the great rapport the two shared. In fact, Aishwarya even turned muse for the teenage Ranbir when he decided to sketch her on a white canvas. Dressed in simple ethnic wear, Aishwarya was seen wearing a blue and white salwar kameez during the sketching session.

A picture of the same was shared by Ranbir Kapoor’s mother Neetu Kapoor on her Instagram page with a caption saying, “The great Artist at work #throwback #aaablautchalen #ranbir #ashwariya.”

Ae Dil Hai Mushkil that released on October 28 amidst several controversies also stars Anushka Sharma and Fawad Khan with Shah Rukh Khan in a cameo. The film is directed by Karan Johar and produced under the banner Dharma Productions in association with Fox Star India.