Tom Cruise met with rapturous applause and thunderous standing ovation on Wednesday evening as he was awarded a surprise Palme d'Or at Cannes Film Festival. The three-time Oscar nominee arrived at the festival for the screening of his hotly-anticipated action film Top Gun: Maverick. 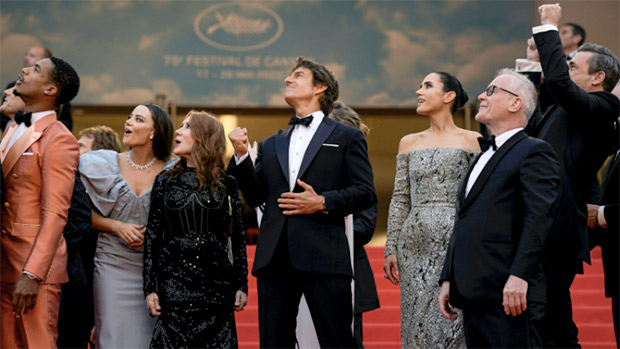 As Deadline reports, prior to receiving the Palme d'Or, which wasn’t expected, he was given a tribute reel before the film played. As a prelude, eight French fighter jets took the sky streaming blue, white and red smoke. Those colors are featured prominently in both the French and American flags, in a fitting piece of symmetry. The three-time Golden Globe winner was in awe on the Palais des Festivals red carpet as the fighter jets whizzed above the proceedings. The squadron did a second pass before the Top Gun: Maverick star took the stage at the Palais. At both the event and the premiere, attendees were treated to a montage of his greatest hits, from Risky Business to Mission: Impossible. 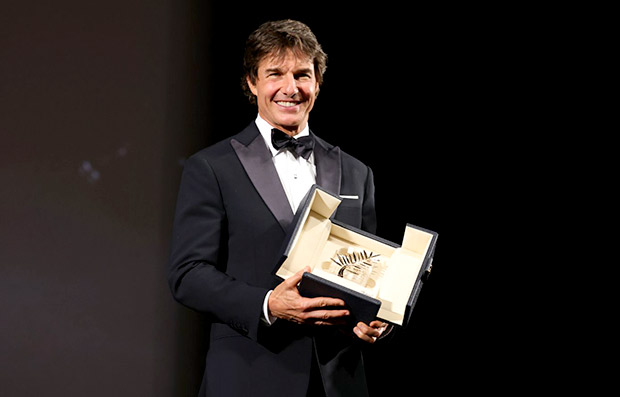 After the actor spent several minutes posing for pictures with fans and signing autographs, he finally joined his team for the screening. The festival crowd joyously interacted with the film during the screening, cheering and gasping at stunts. An overwhelming response came when Val Kilmer, who starred as Cruise nemesis Iceman in the original film, appeared in a scene with Cruise. The tabloids report that after the film's screening, the audience responded with a five-minute standing ovation that moved Cruise to tears.

“This is an incredible evening and an incredible time .. just to see everyone’s faces,” Cruise said from the stage of the Palais. “It’s been 36 years since the first ‘Top Gun’ and we’ve had to hold it years for the pandemic.” Cruise then called on the cast, which included Jennifer Connelly, Miles Teller, and Jon Hamm, and Paramount’s executive team to stand up, as the audience cheered. “This movie was a dream,” Cruise said. “We talked about it when filming. I just want to see everyone’s faces. There’s no masks and we’re in a movie theater. I’m going to take this all in and I feel very grateful. We’re here for you. I make all these movies for all of you and I’m very blessed to do what I do. Enjoy this evening. You all have made my life.”

Top Gun: Maverick will exclusively hit theatres on May 27. The long-awaited sequel to the 1986 blockbuster marks the actor's return to the festival three decades since the screening of Far and Away in 1992. For the premiere, Cruise was joined by his Top Gun: Maverick castmates which included stars Jennifer Connelly, Miles Teller, Jon Hamm, Glen Powell, Jay Ellis, Danny Ramirez, Greg Tarzan Davis, Lewis Pullman and others. The film's director Joseph Kosinski and producer Jerry Bruckheimer were also present on the red carpet.