Last Updated 25.01.2022 | 10:40 PM IST
feedback language
follow us on
Bollywood Hungama » News » Bollywood Features News » ‘Our business is our business’ dialogue is a rage; Move over Priya Prakash Varrier as Daisy Shah is the new viral girl of the season!

The much-awaited Race 3 trailer was finally unveiled on May 15 and it generated mixed response. It’s the third installment of the Race series and stars Salman Khan, Jacqueline Fernandez, Daisy Shah, Anil Kapoor, Bobby Deol and Saqib Saleem. A section of moviegoers were unhappy with the fact that ‘the face of the Race’ Saif Ali Khan isn’t a part of this film and that Abbas-Mustan, who directed the first 2 parts, have been replaced by Remo Dsouza. The trailer gives a vibe that Race 3 will be a fun, masala film but many couldn’t stop complaining and even laughing about it. One of their grouses was that the dialogues are too cheesy. One such cheesy dialogue that got a lot of brickbats was ‘Our business is our business…none of your business’! It’s mouthed by Daisy Shah and even she came under the fire. As it is, many don’t feel she’s worthy enough and believe that it’s due to Salman Khan that she’s getting a chance to be in such plum projects. 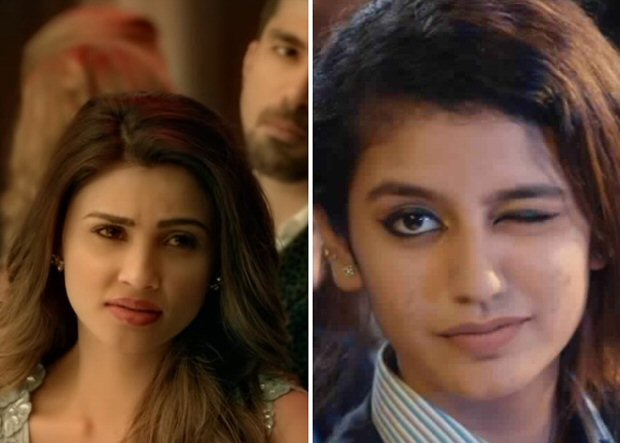 It’s been 8 days since the trailer was out and this particular dialogue was converted into plenty of memes. May 15 was also the day when Karnataka elections results came out and though I didn’t see it myself, I am sure that there must be some meme showing Rahul Gandhi telling Narendra Modi or Amit Shah that ‘Our MLAs are our MLAs’! Just a random scroll on your Twitter, Facebook or Instagram feed would give you an idea on how this one-liner has crossed all boundaries. Today, netizens woke up to a surprise as even Mumbai Police alerted people not to share public information online, by using Daisy Shah’s picture and tweaking her dialogue!

Thankfully, the Race 3 team has taken the criticism in its stride. ‘Any publicity is good publicity,’ is an age old adage. They realized that their film is being talked about every time a joke or meme is being made, mocking the said dialogue. As a result, they have no complaints. In fact, the actors of the film like Jacqueline Fernandez and Salman Khan uploaded videos mouthing Daisy Shah’s dialogue. Jacqueline in fact posted two videos and one of it also had Daisy and their banter was quite nice. Thankfully, this time there would no ‘catfight-between-Race-3-heroines’ stories. The film is more than three weeks away and I am sure as Daisy speaks about her experience over her dialogue and a lot more, it’ll lead to more awareness and thereby hopefully, a lot of buzz. Daisy has already responded in a very endearing way to the Mumbai Police tweet. 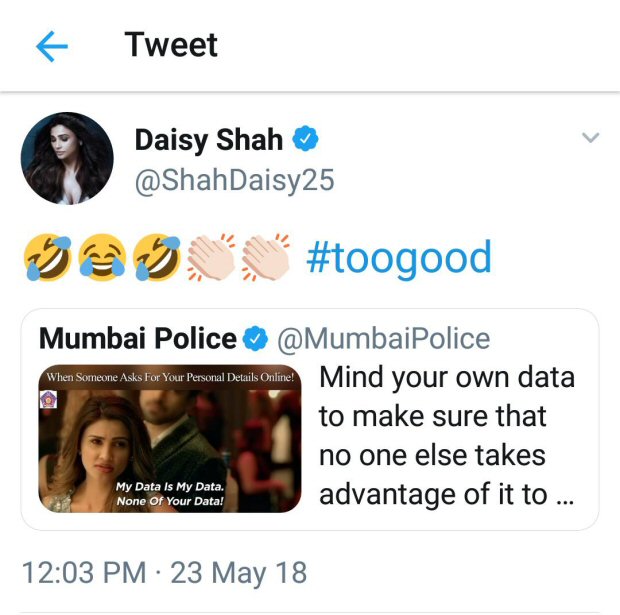 What’s also interesting to note is that very rarely it happens that a dialogue, scene or a song becomes such a rage before the release of a film. 8 years ago, Sonakshi Sinha’s ‘thappad se darr nahin lagta’ similarly caught attention. But this dialogue in Dabangg trailer was loved and not made fun of, as it happened in the case of Daisy Shah’s one-liner. Social media wasn’t that huge back then and hence, it didn’t go viral. Same was the case with the ‘ek baar jo maine commitment kar di’ dialogue mouthed stylishly by Salman Khan 9 years ago in Wanted. In today’s times, the response would have been crazy. Dhanush was a huge star down South but he became known pan India because of his song ‘Kolaveri Di’ from the then unreleased 2012 film 3. Before Baahubali, this was the song that had neatly bridged the North-South divide in our country! Last year, Shahid Kapoor’s long monologue ending with ‘Woh Rajput’ in Padmaavat trailer also had become famous, though not as huge as Race 3. And just a few months ago, it was Priya Prakash Varrier ruling the roost in this category. Her sexy wink in a clip from the upcoming Malayalam film Oru Adaar Love caught the whole nation by storm. And now Priya Prakash Varrier has been replaced by Daisy Shah unexpectedly!

The only fear is that our filmmakers might try purposely incorporating such a silly dialogue in their films from now on, hoping that it would similarly go viral. As a result, the writing might suffer. However, such things can’t be planned. Even the Race 3 makers never must have imagined in their wildest dreams that this particular dialogue would become a talking point. Here’s hoping that no one replicates this aspect and as for Race 3 makers, enjoy the attention while it lasts!