The much-anticipated sequel Bunty Aur Babli 2, which has been completely rebooted and is set in today’s day and age, will have a scale that will wow audiences. The team shot elaborate film sequences across two Abu Dhabi locations, the Abu Dhabi Equestrian Club and Emirates Palace, using several areas of the hotel. twofour54 and Yash Raj Films (YRF) together released an exclusive image of the Bunty Aur Babli 2 hyped cast – including Saif Ali Khan, Rani Mukerji, Siddhant Chaturvedi, and Sharvari – on location at the stunning Emirates Palace hotel. 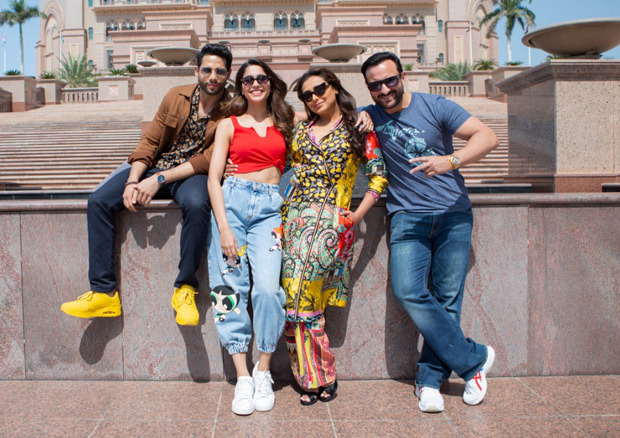 More than 350 cast and crew members filmed over 10 days smoothly with twofour54 providing Yash Raj Films with full production services across key areas including location assistance, travel and accommodation, and production management. Two interns from the creative lab, twofour54’s youth community, supported the cast and crew of Bunty Aur Babli 2 during production in Abu Dhabi. Interns worked across a range of areas including casting, production assistance, and locations.

Michael Garin, CEO, twofour54, said, “Over the past few years, we have been honoured to welcome to Abu Dhabi some of the most dynamic production houses from Hollywood and Bollywood. As production management partners, we are always looking for ways to ensure that projects run seamlessly. Seeing an industry leader like Yash Raj Films returning time and time again is a real testament to Abu Dhabi’s end to end production offering”

Rishabh Chopra, General Manager – Production, Yash Raj Films said, “We are thankful to twofour54 for all the support and assistance that they have provided us to ensure that we have an amazingly smooth shooting schedule in Abu Dhabi. The Bunty Aur Babli 2 team was delighted to shoot at the exotic Emirates Palace and the picture-perfect landscape of Abu Dhabi just added to the scale of our film. The portions shot in Abu Dhabi will be a treat for the eyes of audiences.”

Bunty Aur Babli 2 will introduce an incredibly fresh pair as the new talented conmen. Siddhant Chaturvedi, the’ Gully Boy’ hunk who played the role of MC Sher with elan, is the new Bunty and YRF is launching a new heroine to watch out for with this franchise. Babli will be played by Sharvari, a stunningly gorgeous girl that YRF discovered two years back and has been coaching her since then.

The film, in an exciting casting coup, also reunites Saif Ali Khan and Rani Mukerji and will present them as the original Bunty Aur Babli in the film! Saif and Rani were a blockbuster pairing as they delivered big hits like ‘Hum Tum’ and ‘Ta Ra Rum Pum’ and were celebrated as a pair to watch out for given their infectious chemistry.

Produced by Aditya Chopra, Bunty Aur Babli 2 will be directed by debutant Varun V Sharma, who worked as an Assistant Director in YRF’s biggest blockbusters Sultan and Tiger Zinda Hai.