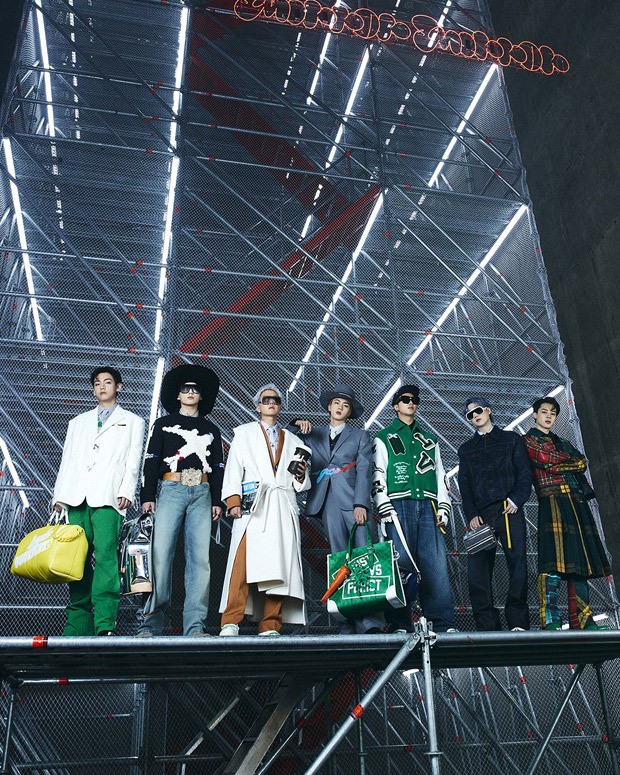 Since the BTS x Louis Vuitton collaboration was announced, fans were not able to hold their excitement. This afternoon, the showcase premiered and it totally seemed like a cinematic masterpiece. They made the set look at Bucheon Art Bunker B39, an art and culture space just outside Seoul.

Kicking off the showcase with a voiceover that says, “I had been a pilot for around 7 years. In the midst of the bad weather, I began my trip having gone through countless amounts of typhoons. I was familiar with the skies but I came across a totally foreign place, tall skyscrapers, wide windows, and long halls. Everything was still as if time had stopped. The sun shone in and lingered in the landscape. There were figures walking through the still landscape. It wasn’t clear if they were walking up or down the skyscraper. The clouds closed and the city disappeared. I could never find that place again.”

The show began with the entry of Jimin. Showcasing his aura and charm, he wore a mix of the white greyish-coloured suit. He kept it simple by accessorizing this look with red transparent sunglasses. The baton was then passed to group’s leader RM. He wore an oversized coat that consisted of 3 airplanes. He wore a black hat and carried a metallic briefcase.

As for Suga, he wore a black suit and a blazer which consisted of 3 airplanes, similar to RM’s coat. He also carried a green and white-coloured cross body bag. The strap of the bag had a message that read “Same palace at the same time.” J-Hope looked dapper in Louis Vuitton’s signature design printed suit. The suit consisted of brown and black colour print. The blazer also had a pink pyramid printed in a circle behind the grey-colored background. He accessorized it with a black baguette bag.

V wore a classic NewYork street fashion style – a coat and paired with a black coloured suit that had red checks on it. He carried a coffee cup-shaped bag in one hand and a mini briefcase in the other. Next came Jungkook, who absolutely rocked his outfit. He wore a black oversized coat much similar to RM’s coat. He wore a black suit underneath and carried a black bag.

Closing the show with the handsome Jin, he donned a plaid overcoat and a suit underneath. He also carried a green and white-coloured bag. His outfit was the perfect example of color blocking.

Fans from around the world joined the premiere of the showcase. Designer and Creative Director, Virgil Abloh, presented the Fall/Winter 2021 Louis Vuitton Men’s collection in Seoul with house ambassadors BTS. Virgil being a Ghanaian-American man, incorporated Kente Cloth in order to pay tribute to his African roots.