Back in April 2021, Grammy-nominated group BTS was announced as the new house ambassadors of fashion brand Louis Vuitton. This marked the septet’s first global fashion partnership with a luxury label. They have worn Louis Vuitton on various occasions including their Grammys 2021 red carpet appearance. Now, the brand is gearing up for Louis Vuitton 2021 Fall / Winter Men's Collection by Virgil Abloh ── delivered from Seoul with brand ambassador BTS on July 7, 2021. 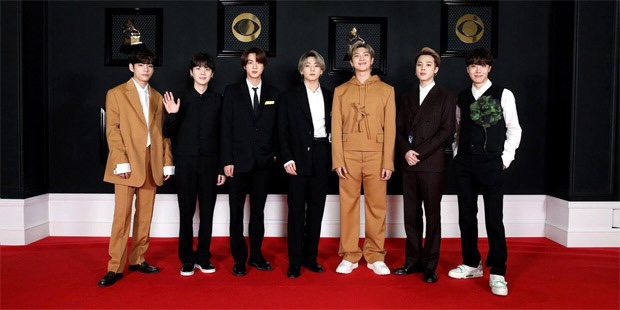 We are excited to be part of the upcoming #LouisVuitton show in Seoul!
???? this tweet to set a reminder to watch on July 7th at 7pm (KST).
#BTS #방탄소년단 #LVMenFW21 pic.twitter.com/mZggkzaG0o

Now, LINE app Japan released new campaign picture of BTS members dressed up in Louis Vuitton’s latest collection. Starting off with V, he channeled a white oversized blazer and green trousers. He donned blue and white-coloured stripes shirts underneath the blazer. He accessorized this look with a yellow bag.

Next up Jungkook, who wore a black sweatshirt that had an airplane embroidered on it. He carried a metallic bag and looked cool in black sunglasses. He added a fedora hat and a broad belt to amp up the look.

J-Hope exuded panache in brown suit which he paired with white overcoat which made this look seem formal yet fashionably informal. Jin, who stood next to J-Hope, looked amazing as he wore a three-piece suit and a huge hat which gave the Wall Street vibe; he added the big green bag which gave the look a modern touch.

RM looked dapper in a green and white-coloured Varsity jacket and baggy denim. He accessorized this look with a navy blue bag. Suga absolutely looked charming as he was all about denim. He wore a navy blue denim jacket and same-coloured denim pants. He wore black big sunglasses. He also carried a baguette bag which made this look even more amazing.

Jimin donned a multi-colored checkered jacket, a green and yellow coloured checkered flannel skirt and underneath that, he wore checkered colored pants. He definitely made us realize that fashion can be exciting and fearless.

BTS is gearing up for the release of 'Butter' CD single release on July 9 (a day when the group's fandom was announced in 2014). They will also release new track ‘Permission To Dance’.