Last Updated 24.09.2020 | 9:18 PM IST
feedback language
follow us on
Home » News » Bollywood Features News » Bollywood News BTS: Taapsee Pannu and Bhumi Pednekar show us why they are perfect as Revolver Daadis in these photos from the sets of Saand Ki Aankh!

Taapsee Pannu and Bhumi Pednekar are coming together for the first time and needless to say, the two of them are going to set the screens on fire! Both have been hailed for their powerful performances in the past and the audiences are eager to see them as 60 year olds in the forthcoming film Saand Ki Aankh. While they gave us a glimpse of their avatars as revolver daadis, here are a series of photos that were shared by the actresses on their Instagram pages. 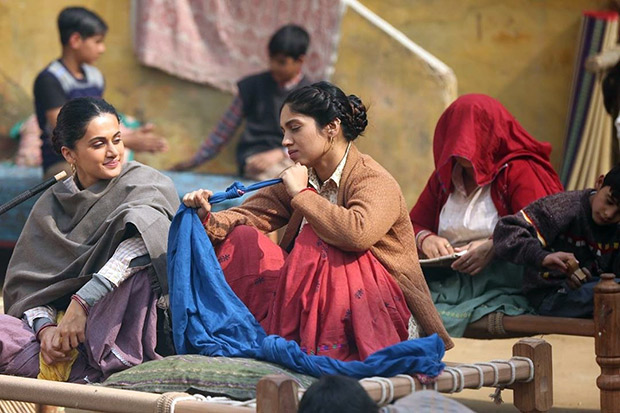 Taapsee Pannu and Bhumi Pednekar took to Instagram to share a series of behind the scenes [BTS] photos from the sets of Saand Ki Aankh. The two actresses were seen showcasing their looks from their younger days to their octogenarian days when they turned into revolver daadis. Readers, by now, would be aware that the Tushar Hiranandani directorial is based on the real life story of octogenarian shooters Chandro Tomar and Prakashi Tomar, who are fondly known as ‘Revolver Daadis’. Here are the glimpses of their avatar.

In the past, Taapsee Pannu and Bhumi Pednekar have shared the difficulties they had to undergo due to the prosthetics that were used to portray the role of 60 year olds. In fact, the actresses also bravely handled trolls that were directed towards the makers of the film for signing younger actresses for the role. Saand Ki Aankh is expected to hit the theatres during Diwali this year and the trailer is expected to be out soon.

Also Read: Saand Ki Aankh: Taapsee Pannu had to be PREGNANT on screen so many times that she doesn’t even remember the kids’ names