BTS FESTA 2020 has reached its final moment! Ahead of their virtual concert on Sunday, June 13 marks the day when South Korean superstars complete their seven years as a band. The members - RM, Jin, Suga, J-Hope, Jimin, V and Jungkook - commemorated the day by recreating their first birthday party that they celebrated in their older apartment. 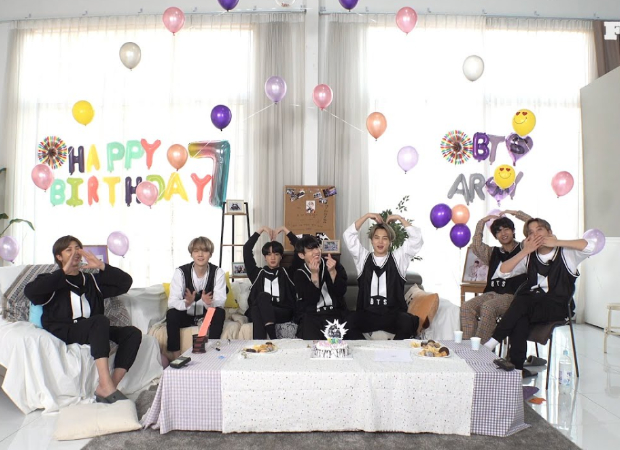 "Wow, can it be BTS?" Jungkook hilariously says after sucking the helium out of a ballon. J-Hope and V join JK in the decorating the venue with "Happy Birthday BTS, Army" balloons, photograph board full of memories. On the other side, Suga and Jimin are in charge of decorating the cake as they layer it with three different frostings and with their group photo as the cake topper. Meanwhile, Jin and RM take over the kitchen duties. Jin cooked Jjukkumi Samgyeopsal (Baby octopus with pork belly) whereas RM made Japchae which is a sweet and savory dish of stir-fried glass noodles and vegetables. Everyone was surprised by RM's cooking skills.

After the cake cutting and celebratory feast, the members discussed their journeys, each other had some precious memories to share, Jungkook recalled his fight with Jimin as the latter narrated the incident hilariously. In the end, the septet talked about how they overcame obstacles with hard work and determination and also with the support of ARMY. While they couldn't meet them since Map Of The Soul has been rescheduled amid pandemic, they are hopeful to meet them soon in the future as soon as the situation gets better.

As of 12 am KST, Twitter will have nine emojis dedicated to the band. The two logo emojis - #BTS and #BTSArmy and seven-member emojis - #RM, #Jin, #Suga, #JHope, #Jimin, #V, and #JK. This will commence on June 13 and will go on till June 30. The member's names will be available both in Korean and English. The logos will be black in colour to show support to Black Lives Matter. BTS made a massive donation of $1 million to Black Lives Matter fund along with their parent company Big Hit Entertainment. Following the suit, the BTS ARMY matched their donation and raised over $1 million in less than 24 hours.

BTS is set to complete a two-week FESTA with Bang Bang Con - The Live on Sunday, June 14. The virtual concert will be live-streamed with millions of fans expected to participate.