South Korean group BTS returned to late-night television in the US to enthrall the audience with their latest chartbusters. The septet took over two nights on The Tonight Show Starring Jimmy Fallon to perform their two English tracks - 'Butter' and 'Permission To Dance'. 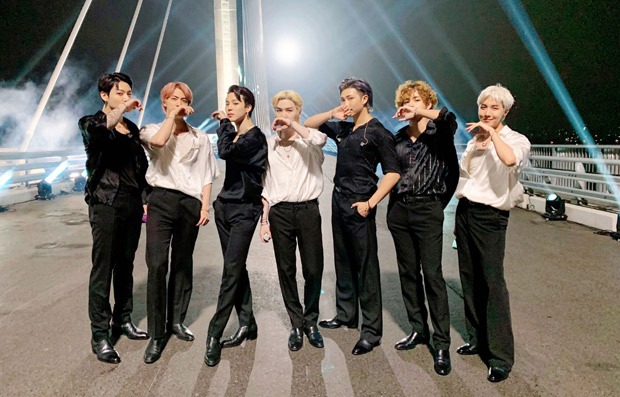 On Tuesday night, July 13, BTS were special guests on the talk show where they spoke about their latest song, debunked some rumours about themselves, and had the TV premiere for 'Permission To Dance'.

Performing all the way from South Korea, their virtual performance was filmed at Airjoy, a closed shopping mall in Yeongjong-do. The mall is now closed but the place has become a hub to film music videos.

On Wednesday night, July 13, the bar was already set by BTS for virtual performances but they took it to another level by performing at World Cup Bridge in South Korea. Filmed at night, BTS was dressed in silk shirts and trousers as they showcased their musical prowess and screen presence in the delightful 'Butter' performance. The venue might seem familiar to many, especially to those who watch Korean dramas.Pop icons BTS released their second English single 'Butter' on May 21 and since then the song has topped the Billboard Hot 100 chart for seven consecutive weeks. The group has extended their own record as the song becomes the 8th debut in history to stay No. 1 on the chart.

BTS recently released their CD single ‘Butter’ that includes the chart-topping summer song 'Butter' as well as the brand new track 'Permission to Dance' that will get your heart pumping.