Hello? Hello! BTS is embracing the rockstar vibes. The South Korean group, who is basking in the stupendous success of their second English single 'Butter', is gearing up for the CD single release along with a new track dropping next month. However, the group is yet to reveal the track officially but reports suggest the song is titled 'Permission To Dance'. 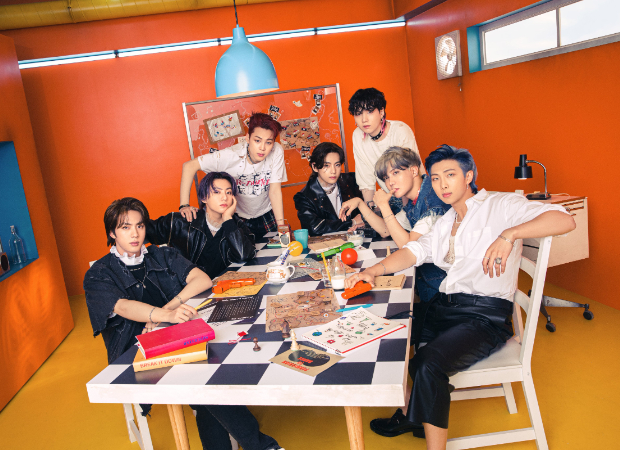 On June 27 (June 28 midnight KST), BTS dropped first concept photos of 'Butter' CD single, and well, what can we say - pop-punk fashion blended old-school style, Y2K era but with a modern twist! The Y2K style and grunge fusion is the 'IT' style in 2021. RM makes a strong case for that subtle rockstar vibe in a crochet top paired with a crisp white shirt and satin ankle-length trousers. The rings, pearl chain, black shoes, and well, powder blue hairdo definitely add a lot of oomph to the look. Jin embraces the double denim trend paired with a ruffled black and white top with high tops. The dark brown hair with light brown streaks makes up for the perfect concept photo. Suga brings strong vibes in a white tee with washed denims paired with black sliders. Making the look edgy, he dons a black choker and pink hair extensions, and pearl accessories.

J-Hope spruced up his style with the double denim trend - half jacket and shorts - with furry big ole boots that have recently made a comeback on the runway. The highlight of the look is definitely the blonde hairdo with hues of blue. streaks. He is followed by Jimin making a statement white graphic tee paired with plaid skirt mini, pop-punk era's favourite piece of clothing paired with furry big boots. The undercut maroon-ish hair is absolutely smokestorm. V looks handsome leather jacket, denims, and black boots. He is thriving in rockstar vibe with that 'hero' hair. The youngest one Jungkook flaunts his purple hairdo in the concept photo whilst compelling in a leather jacket, fringe denims, sliders, lace ruffled sheer shirt with chains and rings - not to forget his ARMY tattoo in full glory.

Just like RM once said in a Rolling Stone interview, “The labels of what being masculine is, is an outdated concept.” BTS has always been unapologetically themselves when it comes to music, fashion, and beyond and these concept photos encapsulate their unique style quotient. Their style is driven more by individuality and together they bring harmony in the concept photos set against orange to yellow ombre hues.

Apart from the style, the easter eggs in them are something that's always fascinating. 'Butter' lyrics can be seen throughout the pictures - “Like a criminal”, “Hot like summer”, “Look in the mirror”, “Break it down”, “Superstar” and “We gon make you rock and you say (yeah)”. One of the cards kept on the table mentions “Permission To Dance” which is rumoured to be a new track along with phrases like “For the ARMY” and We don’t need to worry.” There's a map as well which is pretty intriguing along with polaroids on the wall.

Meanwhile, BTS' dance-pop anthem 'Butter', which released on May 21, is at No. 1 on the Hot 100 chart for a fourth consecutive week, making BTS the first Asian act in history to achieve this milestone. It becomes the group's longest-leading No. 1 hit, surpassing the three-week run of 'Dynamite'. BTS has dropped one instrumental and three remixes of 'Butter' - Hotter Remix, followed by Sweeter and Cooler remixes. The group is basking in the glory of their latest English single 'Butter' which has been topping the Billboard Hot 100 charts for four consecutive weeks. 'Butter' single CD will be released in two versions  - Peaches and Cream. The new track details are yet to be announced officially. It releases on July 9, 2021.