Globally acclaimed power groups Coldplay and BTS are all set to drop their collaboration new single ‘My Universe’ on September 24. On Wednesday, before leaving for South Korea, BTS met Coldplay members. 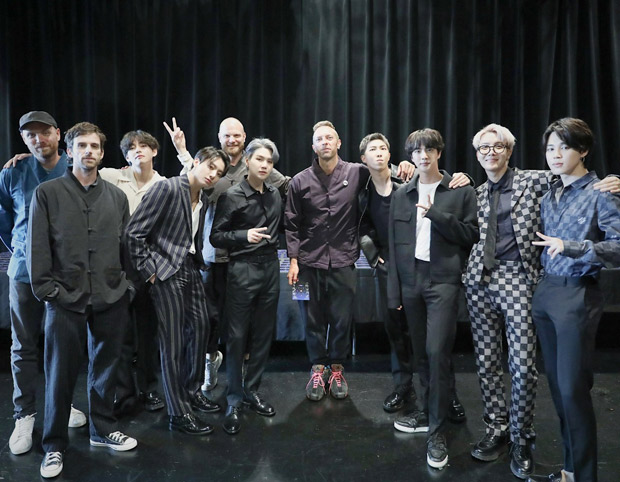 Both the groups posted picture on their respective social media accounts. BTS took to their official Twitter page to share a photo with the caption that read, “My Universe Crew! (+modernizedhanbok).”

Ahead of their collaboration single release, the groups meet up in New York City. This is the second official meeting between BTS and Coldplay, following Coldplay vocalist Chris Martin's visit to South Korea back in April to work on their music project with BTS.Chris Martin had also visited the office building of BTS's agency, HYBE Labels.

On September 22 IST, Atlantic Records revealed the official schedule of the release. Previously a clip of all the artists was dropped where they were seen jamming together along with a teaser image. As announced, the ‘Inside My Universe Documentary’ will be released on September 26 at 9 PM KST (5:30 PM IST) followed by the ‘Supernova 7 Mix’ and ‘Acoustic Version’ on September 27 at 8 AM KST (4:30 AM IST). Though, the official music video’s release date is yet to be announced.

TWO DAYS until Friday's release of My Universe by Coldplay X BTS - and we can tell Coldplayers and the ARMY are as excited as we are! ???????????? Here are some #MyUniverse dates for your diary…
Pre-save / pre-order: https://t.co/89xSOizV6J@coldplay@BTS_twt@bts_bighitpic.twitter.com/fFsAz3O1uO

The physical version of the project will be available in a limited-edition two-track CD and will be inclusive of the handwritten lyrics by Coldplay and BTS and for every purchase made of the CD on the Coldplay store one tree will be planted.

Coldplay is gearing up for their forthcoming ninth studio album Music Of The Spheres, which will be out October 15th, 2021.

Also Read: Coldplay and BTS’ collaboration track ‘My Universe’ to release on September 24