It's been a musical week for the fans of BTS. After the much-awaited release of their studio album 'BE (Deluxe Edition)' on November 20, global superstars BTS performed their chart-topping single 'Dynamite' and title track from the latest album 'Life Goes On' at the American Music Awards 2020. Hosted by actress Taraji P. Henson, the awards night took place at the Microsoft Theater in Los Angeles. 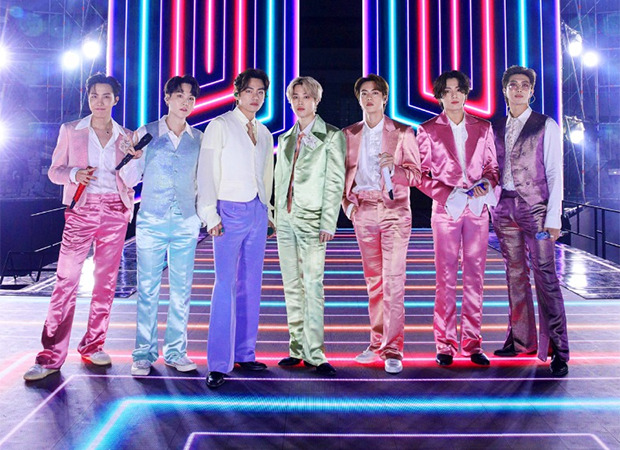 Back in 2017, BTS made their stage debut with 'DNA' song performance. BTS have come a long way since then as they were the closing act at the 2020 American Music Awards. They pre-recorded their performances on 'Dynamite' and 'Life Goes On' all the way from South Korea. The members of the group RM, Jin, Suga, J-Hope, Jimin, V, and Jungkook wore matching black and white ensembles for the performance of 'Life Goes On'. They rented our Seoul Olympic Stadium, also known as Jamsil Olympic Stadium, where the performances were recorded. As they crooned the title track of 'BE (Deluxe Edition)' flaunting their pitch-perfect vocals, the entire stadium lit in the purple ocean dedicating it to their fans (ARMY).

This was followed by another performance on 'Dynamite'. This time septet was back in satin and pastel suits as the stadium lit up in fireworks while they crooned the disco-pop song that has become the anthem of the year. The crisp choreography, the beautiful set, and bazillion fireworks were the perfect way to close the awards ceremony.

When it came to virtual performances, Big Hit Entertainment has taken full advantage of it to showcase some of the most creative stages for BTS. With every performance, they have ensured to showcase the beauty of South Korea.

How does life go on after that @BTS_twt world premiere performance? #AMAs pic.twitter.com/77U4Azs0fM

BTS were nominated in two categories - Favorite Social Artist and Favourite Duo Or Group - Pop Rock and they took home both the awards, respectively.

WOWOWOW. No words for @BTS_twt at the #AMAs. They just set the night alight! Army, what did you think? pic.twitter.com/I4KpwdF7lF

After releasing the official music video of the title track 'Life Goes On' on Friday morning, the second video was released on Saturday (which is 12 am KST). The lead single belongs to the Alternative Hip Hop genre with sentimental acoustic guitar sounds captivating the ears of the listeners. The lyrics echo a comforting message in the face of unexpected turns and abrupt disruption: “Life goes on”. Anyone who has been through 2020 can easily relate to this song delivered through BTS’ emotional voice. The music videos have been directed by Jungkook.

ARMY!???? Did you see our performance on the @AMAs? Hope you had fun as much as we did! Stay safe everyone! #AMAs #BTS #방탄소년단 #BTS_BE #LifeGoesOn #BTS_Dynamite pic.twitter.com/KNCy97vOKF

ALSO READ: BTS drops second Jungkook directed music video of ‘Life Goes On’ after ‘BE’ release and it is the most wholesome thing you will watch this weekend