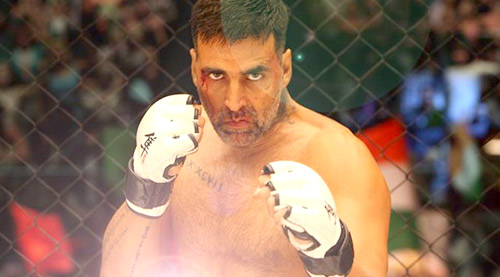 Do you think Brothers has the potential to be a blockbuster this season?
Brothers is like a childhood dream, it's my Rocky, it means an awful lot to me. Just like I had Rocky posters up on my wall, I hope there's a little kid out there that gets inspired by Brothers and puts my poster on his wall and looks up to it with passion to fight just like I did, that's all I want from this film, nothing else, just inspiration for all men, women & children...

In Brothers you play a boxer for the first time in your career. What preparations did you make?
I started my prep over 6 months before the film hit the floors. Due to my character's unique metabolism I had to lose weight and lean down my physique to match the look of an ex-fighter who is now married and is a physics teacher.

How did you achieve that look?
I had to shed a lot of my Punjabi bulk and tone up to look more like an athlete than a boxer. Whereas Sid (Sidharth Malhotra) had to put on weight and muscle to look the exact opposite of me.

Akshay '2015' has been a remarkable year for you so far. From the raw and gritty Baby to the masala fare of Gabbar Is Back...Where do you think Brothers fits in?
Brothers is definitely the most physical of them all... There hasn't ever been a Bollywood film like this, yet at the same time many will be able to relate to it, not the violence or the fights per say, but the turmoil a family goes through either from mis-understanding or from what seems unforgivable circumstances. Yet at the end of the day, where does revenge or fighting get us?

You tell me?
Sometimes all it takes for us to get rid of our anger is introspection. Instead of carrying years of tension on your shoulders, just lock yourselves in a room and fight it out, never let hate come between what matters most. Family stays, not pointless grudges.

Tell me in some detail about your forthcoming assignments?
Well the Big Fight for Blood, Money, Family and Life releases August 14. Right now Brothers all the way...Then Singh is Bliing will release on October 2, comedy through & through... AirLift based on real life happenings in the 90's during the Iraqi War, that will release early next year. Housefull 3 goes on the floors end of this Month, so that'll be ready for release mid next year, I guess.