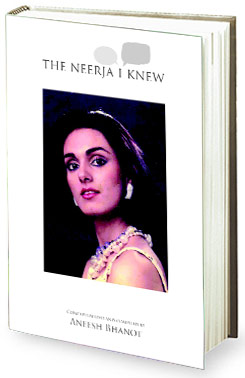 Neerja is indeed one lady who is being most talked about this year. Even though almost three decades have passed by since she met with an untimely demise, the recent release of the Sonam Kapoor starrer has brought back the memories, and made the world aware about her heroic act when she saved more than 300 passengers from terrorists who had hijacked a Pan Am flight in Karachi.

Hence, when it was revealed that her brother Aneesh Bhanot had put together the book 'The Neerja I Knew', I was really quite excited. After all, it would have been a tribute no less to the young woman who is now a source of inspiration for many. Also, the book would have been a great source to know a lot more about Neerja than what the film has already revealed about her.

As it turned out though, 'The Neerja I Knew' - which is panned across just around 70 pages - is basically a picture book affair where a few short chapters are interwoven with Neerja Bhanot's childhood and modeling day pictures. Well, if pictures could tell a story then the book does make for a valuable asset as you are left mighty impressed by the grace and manner in which Neerja carried herself as a model. She is quite pleasing to eyes, be it in the traditional Indian sarees or the Western wear.

Of course, if you have watched the film already, a lot of these pictures appear in the end credit rolls as well. However, for those who wish to have a collector's edition at home or office, the book makes for a visually impressive affair as you do fall in love with Neerja instantly.

While the pictures do their job well, what you do miss are some in-depth write-ups about what she truly was as a person. Anish does the hard work of bringing on board Neerja's friends from school and college, so that they could dedicate a short-n-crisp chapter each for her. However, barring a couple of friends' majority of the rest, struggle to put together words that are beyond the obvious.

They can't be blamed either as they are penning down words 30 years after they saw her last. If you and I would have to actually remember even one of the closest friends from 1986, it would be a Herculean task to put just a face behind the name, let aside remembering what that person was exactly, and the incidents that happened back then. In that aspect, the writers are challenged to pin down the memories from the past and try to present a cohesive tale. Yes, they do make an attempt, but honestly the write-ups don't really turn out to be in-depth enough which would have made Neerja come closer than ever.

In fact the most heartfelt of pieces (as expected) is the one which was penned by her father Harish Bhanot after her death. It has been re-published for the book and makes you go down the memory lane. However, how one wishes that there were more such insightful accounts on display.

That said, and as mentioned earlier, the book does well as a visual affair and though you don't get to 'know' more about Neerja Bhanot here, you do get to 'see' her at the least, which is a bonus for sure.