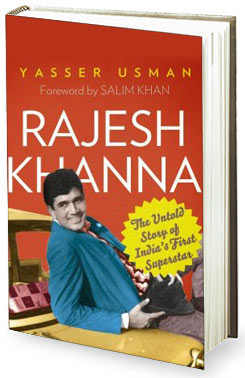 More than six months back there was a book on Rajesh Khanna released which went by the name of 'The Loneliness of Being Rajesh Khanna - Dark Star'. At that time it had seemed that one has seen it and read all about the legendary actor. Well, as it turns out, there is never enough when it comes to knowing more about those who have left a huge mark in the world of entertainment, especially the Hindi film industry. Hence, when one goes through the 300 page book by Yasser Usman, one realizes that there is so much more about Rajesh Khanna that was waiting to be told.

It won't be wrong to say though that I picked up the book through the fair bit of apprehension. Unlike 'The Loneliness of Being Rajesh Khanna - Dark Star', the latest book, 'Rajesh Khanna - The Untold Story of India's First Superstar' isn't packaged as well. Right from an ordinarily designed cover to the basis binding, one gets an impression of a text book in the offering, instead of something that would appeal to those who want to preserve something immortal when it comes to Bollywood. The title too is a bit too ordinary and the print is kept basic too.

However, as one starts turning over the pages with a Foreword by Salim Khan kick-starting it all, you know that it is going to be an interesting affair for sure. Yes, the childhood portions (most of which sound fictional in such genre of narrative where the man of the moment is not there to actually tell the tale) of Rajesh Khanna are not quite excitingly told while his growing up years and subsequent interest towards theater are sketchily narrated as well. In fact, somehow one gets an impression that there is a lot missing in this time frame of the man's life and one is just forced to join the dots.

What gets your attention though is once the drama moves towards the late actor's entry into the world of showbiz. His early years, the series of flops that he gathered, the offbeat route that he took with Ittefaq, the superstardom that he gained with Aradhana (which was almost on the verge of being shelved, while the double role was an afterthought), the series of back to back hits that he gained and the perceived dip that he had in his career (when his films were actually making money but were relatively lesser successes when compared to his earlier films) makes for an interesting read indeed.

While all of this is interestingly told, the book takes a turn when compared to 'The Loneliness of Being Rajesh Khanna - Dark Star'. While the latter had focused a good deal on the films that he did from mid-70s to the mid-90s and explained (in quite some good detail) around how he had a roller coaster ride in the world of films, 'Rajesh Khanna - The Untold Story of India's First Superstar' is more of a humane tale. It talks more about the emotions that Rajesh Khanna went through in this phase, and this is where Yasser Usmaan succeeds quite well in establishing the connect between the superstar and readers.

So right from his personal relationships to his professional rivalries are all narrated in very good detail, something that keeps you turning over the pages at a vigorous pace. What Yaseen does well is digging down from the archives, be it magazines, newspapers, books, videos or any other form of write ups or media that is available on Rajesh Khanna, and present it all in a sequential story telling format which makes for a highly exciting and engaging tale. There are no sides taken and what makes it all the more credible is when even Rajesh Khanna's quotes about these episodes are presented all over again.

Quite a few industry insiders as well as friends, acquaintances and family members are also interviewed for the book which ensures that a balanced view is presented for the reader. Eventually one is convinced by the fact that while the man was high on superstardom, he was a normal human being after all who just had his own fair share of joy, excitement, sorrow and lows. This isn't all as he did have a practical view of things that were happening around him and while some it may seem that the realization set in only after a while, for others it was mainly due to the influence of people around him who hailed him as a superstar.

No wonder, you are excited enough to check out how the life and times of Rajesh Khanna played out. As is the adage, don't judge the book by its cover. The content of 'Rajesh Khanna - The Untold Story of India's First Superstar' pretty much proves that.

"The only stardom I've seen seem that is…

When Akshay Kumar waited for hours to meet…