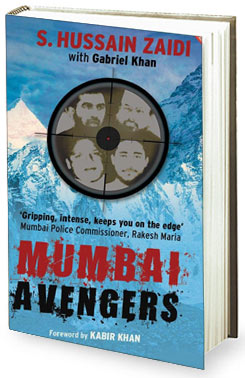 Espionage thriller is one of the favorite genres in Hollywood films as well as TV series. If treated well, this genre has time and again thrown quite a few milestones,

Bourne films and recent Homeland TV series being two such major examples. Hence, when Bollywood tries something in that direction, all eyes are on how it all turns out to be on screen.

Phantom is one such film which is set to arrive in August this year and with Kabir Khan (New York, Kabul Express, Ek Tha Tiger) being at the helm of direction and Sajid Nadiadwala as a

producer, one expects the Saif Ali Khan and Katrina Kaif starrer to be a striking affair.

So why are we talking about Phantom here? That's because in one of the firsts, the book on which the film is based, Mumbai Avengers, has already been released on the stands. While most

filmmakers opt to keep their projects in secrecy till the time First Look is out, an innovative step has been taken to let at least a segment of audience warm up to what the film is all about.

Hence, the 350 page book Mumbai Avengers is available for the consumption of readers who wish to know about the core plotline and narrative of Phantom.

Well, with a headline that reads bold and clear - 'Retribution for 26/11' - you are excited soon enough. More so since the book is written by S. Hussain Zaidi, the man who penned brilliant affairs

like Black Friday and Dongri To Dubai to name a few. From someone who doesn't beat around the bush, doesn't shy away from telling truth as it is as, has a perception of being a fearless and earnest

investigative and crime journalist, and tells even complicated stories in as simple manner as it can be for the consumption of 'aam junta', one expects Mumbai Avengers to be another exciting and

As it turns out, the book flows as smoothly as it can be, and that too with there are close to half a dozen principle characters with a dozen more peripheral, yet important characters who have a

lot to add in order to make Mumbai Avengers an exciting, dramatic, intelligent, edge of the seat thriller with dollops of suspense elements thrown in as well.

While this is a fictional tale, considering Zaidi's penetration into the world of crime and terror, coupled with Kabir's quest of getting into the details of the political and terror scenario, it

won't be wrong to say that at many places you do believe the proceedings to have a lot coming from factual tales that were possibly not declared so due to being classified information. So when

Zaidi, along with co-author Gabriel Khan, a Mumbai based journalist and writer, goes on to spin this tale of 26/11 retribution, you are hooked right from the moment Kabir Khan provides his

The book is about a Retired Lt Gen. Sayed Ali Waris who puts together his ace team comprising of a sharp policeman, a suave tech expert, a cerebral scientist and two battle-hardened army officers.

As they take on the Pakistani army and the ISI, they go through quite some globetrotting in chase of terrorists. So as the action moves through Sweden, Istanbul, Dubai, Pakistan and Singapore while

taking the reader through a roller coaster ride which keeps one in the guessing game right through.

The book takes no time in getting to the point which means there are nail biting moments right from the start. My personal favorite is the episode where the ace team breaks into the hotel room of a

master terrorist and ensures that his death comes across as a reaction to an allergy. A superb sequence in the making. Later, the one which is centered on all the action happening in and around a

cricket match in progress is superb too and is bound to keep the suspense quotient high.

While the first half of the book may give one an impression of all being relatively straight forward for the ace team to go for the kill, the real fun is in the second half when a Pakistani officer

comes into the scene. It is pretty much a fight amongst the equals and the game of cat and mouse being played with fair deal of deception is pretty well handled by Zaidi and Gabriel. Rest assured,

if handled well by Kabir, it would make for a highlight in Phantom.

Yes, what comes across as filmy is the entire climax. From the realistic treatment that Mumbai Avengers gets right through, the entire unfolding of action appears to be designed for a film

narrative. While Kabir in his Foreword has mentioned that the screenplay of Phantom would have certain deviations from Mumbai Avengers, one waits to see how the climactic sequence plays on, as it

would just be the correct finale for a thrilling affair that the film turns out to be.

Meanwhile, it can be said with confidence that Saif Ali Khan pretty much has a success in hand, considering the kind of solid plotline and narrative Mumbai Avengers boasts of, and that too without

once turning into jingoistic or stepping on the pedal when it comes to the pseudo patriotic angle. Moreover, given the international route that the narrative takes, courtesy action shifting through

various countries, the film could well compliment the spirit and ethos of the book.