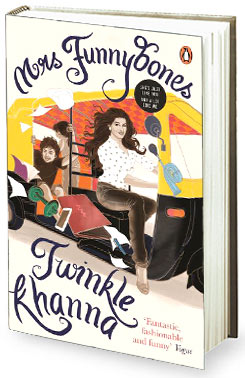 For those who have followed the blogs of Twinkle Khanna on a couple of national newspapers, they would know that the lady indeed has a zany sense of humor. One has to 'get it' to begin with; but then when it sticks with you, you turn into a steady companion. Hence, I was pretty excited when the announcement came around her putting together a book on these blogs. Some of these have been read before in the newspapers (or their online version), many of them are absolutely fresh, and quite a few actually make for a good repeat reading.

No wonder, you do smile through for most of the points, even chuckle along at a couple of places, and largely get entertained as the 250 odd page book unfolds.

For the uninitiated, the book - as the name suggests - is a fun take on the life and times of Twinkle Khanna herself. For starters, what she does wonderfully right is to bridge the gap between her celebrity status and an 'aam aurat'. Just like any other working mom who has a job to do and also a family to run, she shares dozens of anecdotes from her own life that makes one realize that behind the sheen, glamour and all the glitz, at the end of the day the life and times of a celebrity isn't much different from a regular person, as long as she wants to make it one that way.

This is the reason why you nod in approval when she shares uncomfortable questions asked by her kids Aarav and Nitara. You smile along when she mentions all the forwarded emails that she gets from her mother Dimple Kapadia. You empathize when she talks about the maid and helper boy problems. You cheer along when she takes on street-smart ruffians. You giggle when she shares an inside account of so-called social do-s. You feel empathetic when she shares details on handling staff at work. And of course you do get entertained whenever she talks about 'the man of the house', Akshay Kumar.

These are the very factors that bring you in almost a conversation with her as she breaks the barrier between her being an author and you being a reader. Instead, you almost see what she is doing and hear what she is talking about. Also, she keeps the language quite simple without resorting to gimmicks like placing random words out there which may actually necessitate reaching out for Thesaurus!

Of course this also means that the book primarily caters to those who take keen interest in the life and times of the celebrities. This means if you are looking for any intellectual point of views in this compilation then there is absolutely nothing in the offering. Also, if you are not a Bollywood fan and aren't much aware about the family and friends of Akshay Kumar, Twinkle Khanna, Dimple Kapadia or Rajesh Khanna then you may feel a tad disconnected from what is being narrated.

From the target reader perspective, you need to be the one who is glued to the glossies or entertainment channels. This is when it works most.