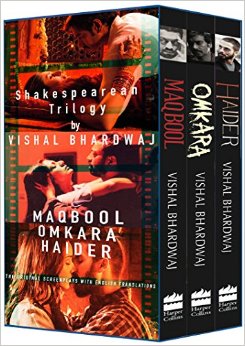 I was pretty excited when I laid my hands on the Box Set of 'Maqbool, Omkara, Haider - A Shakespearean Trilogy by Vishal Bhardwaj'. After all, these three films are some of the best work by the filmmaker who has played an unconventional game ever since he burst into the Bollywood scene. Since this was an opportunity to gain an insight into the accomplished piece of art that also married commerce, this set was much savored.

As it turned out though, while the packaging was just perfect - what with three separate books put together well in a neat manner and making for a good collector's delight, the reading material turned out to be just the Original Screenplay with English translation. Frankly, with a stage and setting like this where Vishal Bhardwaj and his team could have added a lot more insight into the effort that went behind making these films, or at least the thought process that went behind the writing part, this set would have indeed turned out to be a triple whammy indeed. However, there aren't many revelations made.

Oh yes, Vishal does put together a little brief on the making of each of his three films, but that doesn't last beyond a couple of pages. There are no anecdotes shared whatsoever and no deeper views shared behind the before, during or after the making of these films. Agreed that during the promotion of Haider a lot has been read, heard and said about the film. However, Maqbool came at the time when media wasn't that active while during Omkara too there wasn't as much exposure as a regular film enjoys too. In that aspect, a Shakespearean Trilogy deserves a much better placement.

Meanwhile, coming to what one gets in hand; one has to admit that it is indeed nostalgic to revisit the scenes and dialogues from Maqbool, Omkara and Haider. There are certain scenes, certain characters, certain actors, certain dialogues and certain locations that deserve a dekko all over again, and just for that the trilogy makes for a good collection. With so much in the offering with these three screenplays, it actually acts as a library in itself for the students of cinema to read and learn about the creation of scenes, setting of characters and adaptation from Shakespeare to a contemporary world.

While that works, one wonders whether there was much effort that went into proof reading the book when it was published. After all, when on the very third paragraph of the first page of the first book (Maqbool) from a reputed publishing house you read Vishal Bhardwaj saying - "I began my *carrier* as a music composer....", you know there is something really wrong here.