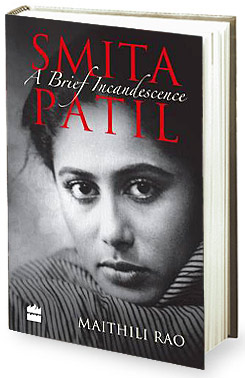 Smita Patil - The name immediately brings on memories as diverse as Mirch Masala (very obvious), Arth, Ardh Satya and Mandi to Nama Halal, Shakti and (guess what) Kasam Paida Karne Wale Ki. Oh yes, as you begin to think more, other films like Manthan (due to that beautiful song), Waaris (another beautiful song) and Aakhir Kyon? come to mind as well.

However, do you know that she had also done films like Insaniyat Ke Dushman, Anand Aur Anand, Badle Ki Aag, Angaaray and Qayamat? Well, this isn't where it ends. In a career spanning just a little over a decade, she had done close to 80 films and that too by the time she turned 31!

Now this is what pretty much intrigues you when you begin to turn over pages of author Maithili Rao's book, Smita Patil - A Brief Incandescence.

It is always a tough task to put together a 300 odd page on someone who is not alive, doesn't have many immediate family members willing to spill many details and hasn't been documented as well as her other peers and counterparts. Still, Maithili Rao takes it upon herself to pen down a book that scores well on ethos, doesn't romanticize the actor, plays a fair balance between acknowledging the actress for her worthwhile not quite turning out to be a hero(ine) worship account.

Thankfully, the book doesn't follow a traditional structure of 'born here - did college there - fell in love here' routine. Typically, such books turn out to be boring for a good duration and also end up including many anecdotes that merely turn out to be make-believe tales. Instead, the book is a mix of Smita Patil's personal and professional life and the to-and-fro approach of juggling between related chapters makes for an interesting read.

Of course, in the middle portions of the book, you do somewhere feel that Rao has over extended detailing around the actress' films. A brief synopsis would have been just fine, the on-the-sets incidents would have been most welcome and any anecdotes shared by her colleagues would have made for an interesting read too. However, what you end up seeing is multiple pages dedicated to a particular film in question, and this by the way happens for at least a dozen odd films. Frankly, it does seem like the author has got carried away by the discovery of many of Smita Patil's films and can't resist but to describe them all.

Now that's where one does get a bit restless because one picks up the book for the person that Smita Patil, and not quite for her Filmography details, which could just have been brief. Thankfully, Rao doesn't restrict her book to just the lengthy description of the films but also brings to fore the easygoing individual that the actress was. This is where you really enjoy reading the book as by the time you are through reading it, one thing which is quite clear is that she was as normal a human being as any other middle class individual is.

What particularly catches attention is the 'bindaas' attitude that she seemingly carried with no pretense whatsoever. A forward thinking girl who came from a regular family, she had her likes and dislikes which were not impacted by the showbiz surrounding her. Also, it is interesting to know about how she managed a balancing act between art house cinema and commercial flicks. Yes, of particular interest is to know about her romantic liaison with Raj Babbar but Rao does well in keeping it brief due to the sensitivity it carries, and gives their relationship the dignity that it deserves.

That by itself is a good enough reason to read the book with a certain respect element as it doesn't end up being a frivolous affair.