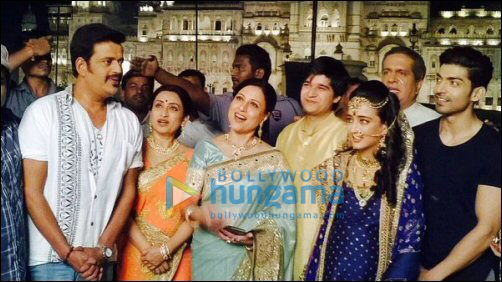 Akshara Haasan, who debuted in Bollywood with Shamitabh, has already started shooting for her second film. While she co-starred her debut film with biggies like Amitabh

Bachchan and Dhanush, this time around, the actress will be sharing screen space along with one film old Gurmeet Choudhry.


Akshara will be next seen in Manish Harishankar's directorial Lali Ki Shaadi Mein Ladu Deewana. Recently a picture from the sets of the film has gone viral wherein Akshara is seen in a

bridal look along with her co-stars Gurmeet Chaudhry and Vivaan Shah of Happy New Year fame. Though there aren't too many details on the film, we hear that Gurmeet will be seen in the role

of a prince. Present on the sets along with crew was also the supporting cast which included popular Bhojpuri actor Ravi Kisen, Darshan Jariwala, Kishori Shahane and Navni Parihar.


Lali Ki Shaadi Mein Ladu Deewana is currently being shot in Baroda and the film is slated to release in 2016.