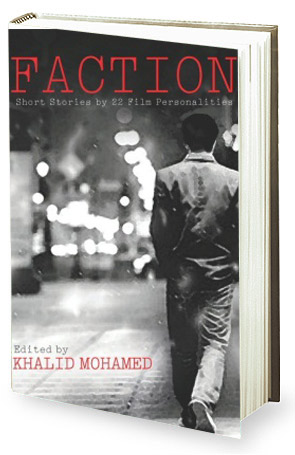 I was excited, really excited, when I came across 'Faction'. There were two major reasons behind that, and precisely in that order. First and foremost, it had the name Khalid Mohamed on the cover, the man whose writings have been a staple diet for many avid readers and followers like me for two decades and more. Secondly, the content promised short stories by 22 film personalities. A flip on the backside of the cover indicated names like Akshay Kumar, Arjun Rampal, Deepika Padukone, Karan Johar, Shekhar Kapur, Varun Dhawan and Sonam Kapoor to name a few.

I was intrigued, and rightly so, as one doesn't really get to hear many celebrities baring their heart out. However, this was a book, not a gossip magazine or a 'masala' television show, while the man who must have been banging his keyboard ferociously was none less than Khalid Mohamed. It was time to enter an engaging conversational exercise spanning 300 pages.

As it turned out though, I was left with mixed feelings after going through all the stories, though not necessarily in an order they appeared in the book. Naturally, the idea was to first exhaust all the celebrities who are hot-n-happening today, in order to get an inside account of what would have once happened in their lives.

However, and surprisingly, the ones who entertained most were Basu Chatterji and Sai Paranjpye who narrated stories that were least expected out of them. Of course, natural storytellers like Farah Khan and Ram Gopal Varma impressed all over again with their free-flowing narratives. In fact it was also good to see Rishi Kapoor opening up about his love affair before Neetu Singh came into his life. On the other hand Manoj Bajpayee's unrequited love story was tragic no less.

Still, how much I wanted the whole book to carry this flavor where stories could have been uniformly interesting and engaging with quintessential Khalid touch to them.

Talking about the ones that excited the most, I would strongly recommend filmmakers to go through Basu Chatterji's 'The Window' which has all the ingredients in it to be developed into a full-fledged screenplay for a Bollywood thriller. There is love, deceit, suspense and a couple of unexpected twists in the tale that kept me hooked throughout. It isn't of course the veteran filmmaker's biographical tale but a fictional account; the kind that has its seeds in pulp fiction.

What is not pulp is Farah Khan's 'Guess Who Came To Dinner' which took me right into the household of Khan siblings who had to make do with meager means with their mother taking care of them. However what happens when an unexpected and unwanted guest comes and stays much beyond a dinner? Really interesting! Ditto is the case with Ram Gopal Varma's 'The Boy Who Didn't Laugh Or Cry' where the man took me back into his childhood, something that he loves to do time and again, and narrated how he stood against all odds and did what he wanted to do most - earn a living out of movies!

There is some good drama in store though with Sai Paranjpye bringing on 'The Gigolo'. Frankly, from the director of Katha and Chashme Badoor, I expected yet another middle class tale. However, this one takes a reader into a foreign land no less with a story that is bold enough to make even a current generation director think twice before filming it for the big screen. No wonder, this one surprised the most.

As for the two love stories that could never culminate into anything positive, there are two distinct approaches followed in Manoj Bajpayee's 'Postcards From Paris' and Rishi Kapoor's 'Love In The Time Of Telegrams'. When it comes to Manoj, he wonders how it would have been for the man today had he actually walked down the altar with the French girl. One wonders if this is a true story indeed as apparently in their younger days, they were in touch only through postcards and love as well as break-up happened via that.

On the other hand, Rishi Kapoor intends to brings on a smile even in his tragedy as he gives a light hearted account of how his love story developed over telegrams before a gossip magazine ruined it for him by running a piece around him in an affair with another actress.

Meanwhile, it isn't as if the other stories don't engage at all. However, when it comes to a definite structure and some surprise quotient making them simply irresistible, not all manage to cover that distance. As for the aforementioned 6-7 stories, they do well in making 'Faction' a reasonably worthy read after all.