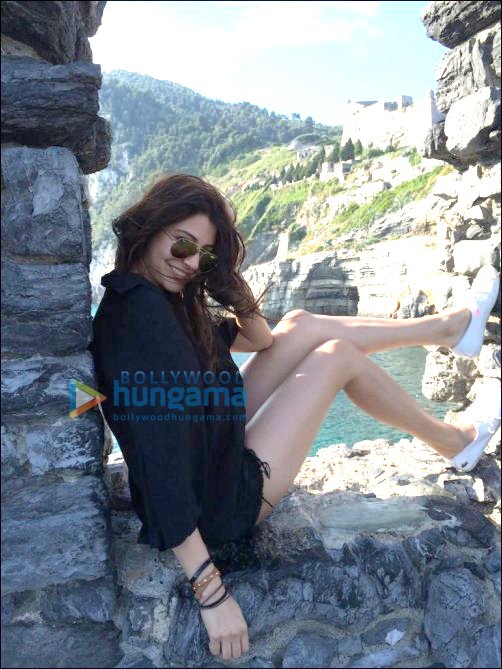 Anushka Sharma, who will soon be seen in the Ranbir Kapoor starrer Bombay Velvet and Aamir Khan starrer PK, has been having a ball of a time shooting for Zoya Akhtar's next Dil Dhadkne Do. Zoya and team recently finished the shoot of the film and returned back to Mumbai. Anushka Sharma, who seemed to be missing the European sunshine while it rains in Mumbai, posted a pic of herself from Italy on twitter.

Tweeting about the same, Anushka Sharma added an image of herself in Italy saying, "It's pouring in Mumbai .. Kind of miss sunshine ..Pic courtesy, portovenere, Italy". The actress was recently spotted in pictures alongside Ranveer Singh and Priyanka Chopra while shooting for Zoya Akhtar's film Dil Dhadakne Do on a cruise-liner.

Dil Dhadakne Do is said to revolve around a dysfunctional Punjabi family on a cruise trip. Produced by Ritesh Sidhwani and Farhan Akhtar, the film features an ensemble cast including Ranveer Singh, Priyanka Chopra, Farhan Akhtar, Anushka Sharma, Anil Kapoor and Shefali Shah and is slated to release on June 5, 2015.