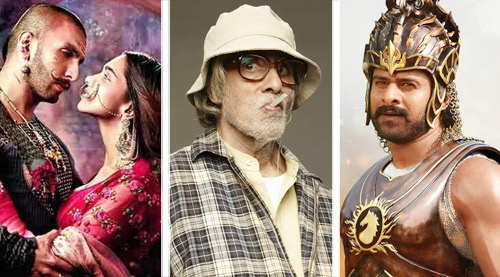 It was the year of promises masterpieces and the unexpected surprises. While films like Dibakar Bannerjee's Detective Byomkesh Bakshi and Anurag Kashyap's Bombay Velvet proved colossal disappointments, surprises came in big and small packets. Luv Ranjan's cocky Pyaar Ka Puchnaama 2 jostled for attention with the big cruise down the Mediterranean in Zoya Akhtar's Dil Dhadkne Do. And dark angry films Meghna Gulzar's Talvar, Sriram Raghavan's Badlapur and Navdeep Singh's NH10 rubbed shoulders with the big silly comedies like Anees Bazmi's Welcome Back and Rohit Shetty's Dilwale. Amidst the furor of assorted films here are the ones that I loved the most.

1. Bajirao Mastani: Saving the best for the last, the year-end brought a bonafide epic into theatres. Bajirao Mastani is an operatic historical. Every component from the songs and the background music to the dances and fights, from the poetry to sabre...it's all food for the eyes and the soul. Sanjay Bhansali makes films. The others make an effort.

2. Piku: The most surprising hit of the year was also the scatological neo-classic of the Hindi cinema. Amitabh Bachchan played a Bhadra Lok obsessed with his bowel movement. Deepika Padukone was his harassed daughter. An Irrfan Khan was the guy driving the father and daughter to Kolkata as the pair drive each other crazy. Bass, itni si baat and itni badi film. Shoojit Sircar is a man of who works wonders with bodily fluids. Vicky Donor would vouch for that.

3. Bahubali: S S Rajamouli's fantasy-epic showed us what we can do to the Hollywood Spectacle if we put our art and heart into it. Bahubali was a dreamscape laid out in a panoramic sweep the sucked audiences into never-never land. This was fable so flamboyant it made The Lord Of The Rings seem redundant, at least for a while. And yes, the hitherto unknown Telugu star Prabhas was suddenly much sought-after in Bollywood. Rajamouli is the first real cross-over director from the South whose Telugu film has made Bollywood sit up and...just gawk. Wow!

4. Masaan: On the other end of scale from Bahubali is debutant director Neeraj Ghaywan's Masaan. Epic in its own unique niche way this is the story about the burning ghats of Varanasi and the dying embers of a dignity denied to a girl Richa Chadha whose only crime was pre-marital sex with her boyfriend. Many strands of oppression and thwarted emotion coursed through the veins of this vibrant view of Varanasi. I can't wait to see what Ghaywan does next. PS .We only had to see Sanjay Mishra in Masaan and then at the end of the year in Dilwale to realize what mainstream Bollywood does to talented actors when they need extra cash.

5. Titli: Another debutant director Kanu Behl scored big with his Dilli-wali version of the

6. Baby: Akshay Kumar gave one of the year's best performances in this super-intelligent take on counter-terror Intelligence. Rigorously researched and remarkably riveting the narrative combined a documentary style with pure Bollywood-entertainment format sacrificing neither realism nor entertainment value while constructing intrigue betrayal and heartbreak in astute colours. Baby deserved more success than it actually got.

7. Dum Lagake Haisha: Director Sharat Kataria sweet simple bitter and beautiful film about a mismatched couple in Hardwar grappling with the exigencies of an arranged marriage. Ayushmann Khurrana loved Kumar Sanu's music. Newcomer Bhumi Pedneker loved only her new husband. And we loved the way she weaned her husband away from Sanu. Simplicity was sublimated to high art in this modern-day take on Basu Chatterjee's 1969 experimental film Sara Akash.

8. Margarita With A Straw: Shonali Bose's brave and beautiful film about an autistic lesbian girl's struggle to ride her physical and emotional impediments with pride and dignity, this was a ballsy and emotional experience which left us emotionally exhausted while enriching us in unexpected ways.

9. Shamitabh : Balki always lays it out in a way that is hard to predict, or replicate. Shamitabh was the story of a mute actor who used the Bachchan baritone to become big. What ensued was dramatic egoistic confrontation filled with the sound and fury of subverted laughter and deflected anger. This was a wicked tongue-in-cheek homage to Hollywood's most famous baritone. Mr Bachchan, please speak.

10. Bajrangi Bhaijaan: Kabir Khan's Bajrangi Bhaijaan was an all-heart drama about Salman and a little Pakistani drifter. Did more for Indo-Pak relations than what all the politicians from both sides of the border have done in 66 years.

11. Qissa: Debutant director Anoop Singh's Qissa is a surreal fable set in post-Partition India about a man whose craving for a male heir causes unmitigated tragedy. Brilliant performances by Irrfan as the delusional father and Tilottama Shome as the daughter forced to be his son.

12. Angry Indian Goddesses: Pan Nalin's film is a Goan chick flick remarkable for its cast of spirited women who let it all hang out. Unexpunged. More power to the Goddesses, angry or otherwise.