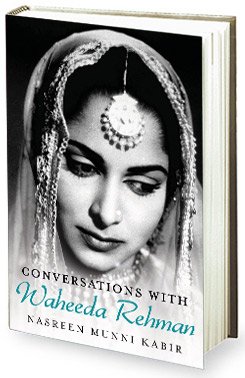 I picked up the book with good expectations. After all, Waheed Rehman stays on to be one of the most accessible and active leading ladies who started her career way back in the 50s and is still in the public eye. This helps form certain connect with today's generation too, hence making one all the more nostalgic about the times gone by and the many lives that would have been touched upon by the veteran actress. Moreover, with author Nasreen Munni Kabir bringing out the book as a 'conversation' with the actress, it promises a fluid reading material in the offering.

This is exactly what one gets in this 200 odd page book which chronicles Waheeda Rehman's journey from being a dancer to an established actress. It all starts off well and you are reasonably seeped into the entire storytelling as well. However, this is also that phase in the book where monotony sets in. Reason being that out of 200 pages, around 50-60 are dedicated just on her earlier films like Pyaasa, Kaagaz Ke Phool, Chaudvin Ka Chand and Sahib Biwi aur Ghulam!

Agreed that the Guru Dutt factor here warrants a larger segment being dedicated to Waheed Rehman's work. However, when more than 25% of print space goes into just a handful of films when she has more than 80 of these to her credit, it comes across as an overkill and makes the wait much longer to read more about those films that haven't been spoken about much.

One redeeming element here though is the fact that the author manages to extract a few never-heard-before anecdotes from these particular films. Now that at least keeps something or the other interesting for a reader to go through, hence making sure that you don't snore away in boredom. Moreover, what makes these conversations further interesting is Waheeda Rehman's zest for living life and being happy and content, something that stays on to be a running element right through the book. One can sense that this is the way she has led her life all through and has absolutely no qualms or regret about that.

No wonder, there are many moments in the book when she demonstrates a child-like enthusiasm in the manner of speaking or remembering the days gone by. At times she is funny, at times she doesn't hesitate in pulling legs of her colleagues, some of whom may have been passed away, at times she feels a tad sad about how a particular incident took place in her life - however, she doesn't get into a politically correct or a diplomatic space, except for one solitary instance when quizzed on her relationship with Guru Dutt. This is the point where she maintains silence and makes it clear that 'her private life should remain private'.

Other than this, there isn't much private about these conversations, except for one limitation that comes with this style of writing. Since the written word of mainly set as a conversation per se between the author and the subject, some of the details are required to be spoon fed to a reader since they don't quite come out naturally between two people talking, who already have a set context. Due to this, it seems rather imposed when a background is force fed into a conversation to make it appear as the spoken word of Nasreen or Waheeda Rehman. At times, this approach ends up being a minor put off, if not a diversion.

Still, when compared to many a biography that follows a quintessential 'chapter approach', this one is still better as there is an element of 'being natural' and 'comfortable in each other's company' that comes into play. This is the reason why quite a few revelations are made in the book, some of which are listed below:

- Waheeda Rehman's constant battle with director Raj Khosla, which led to many love-hate moments between the duo. One such incident happened right at the beginning when Raj Khosla suggested that she change her name as he found it too long. Of course a headstrong person that Waheeda Rehman was, she didn't relent

- How it was none other than Yash Johar who orchestrated her marriage with Shashi Rekhy, an actor turned businessman

- How during the shooting of Teesri Kasam, her co-star Raj Kapoor got into a fight with fans who wanted to catch a glimpse of hers

All of this and more does make these conversations worth having a dekko. Go for it!