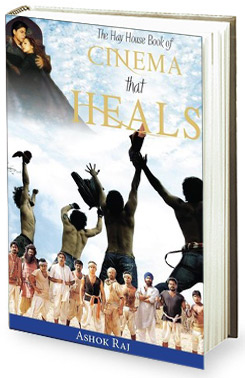 Around half a decade ago, author Ashok Raj had come up with a two volume book on the subject 'Hero'. These volumes were named 'The Silent Era To Dilip Kumar' and 'Amitabh Bachchan To The Khans And Beyond'. As was the case with these books, they were mainly for the literary inclined, were completely deprived of any entertainment value whatsoever and came with such heavy duty vocabulary and sentence formation that it all turned out to be more of a put off than exciting.

Now that he has come up with another book (though thankfully less voluminous) called 'Cinema that Heals', none of the aforementioned traits has changed. Yet again, one gets to read about theories that go on and on to such an extent that they end up straying from what the book actually promised to begin with. Moreover, just a single point, that about highlighting secularism that has bound many a Bollywood films over the decades, is spread over 250 pages, hence making it not just a monotonous read but also a forced affair no less.

Frankly, when the cover of a book features stills from Rang De Basanti, Lagaan and Veer Zaara, you expect some 'commercial' element at the least in what you read, instead of going through some serious matter which is aimed at being 'thought provoking' and 'insightful'.

One could see it coming though. When the titled of the chapter go as 'Minority Films: Symbols of India's Composite Culture', 'The Communal Environment in the 1990s and Beyond', 'Cinema and Mutual Confidence-Building Initiatives', 'The Secular Muslim Persona In The New Millennium' or 'Films Hailing Harmony and Tolerance as a Way of Life', you know for sure that it going to be a literary take on affairs with essays forming a major part of the book.

This is what one gets eventually and though one has to admit that there is quite a lot of research that has gone into putting this together, the unfortunate part is that it aims at a very niche segment of readers. At most, those who like to go through white papers or thesis material may get somewhat interested in what Ashok Raj has to offer. However for a larger set of readers, who anyways pick a film related book after much deliberation, this one just doesn't manage to go beyond a well laid out cover page.

To the author's credit though, he is extremely passionate about the subject and that shows in the way he goes about picking up any and every movie emerging out of Bollywood that has an angle of secularism thrown in. Whether it is relatively unknown films like Ram Rahim, Khuda Ki Shaan and Pandit aur Pathan or the usual suspects like Saat Hindustani, Dhool Ka Phool or My Name Is Khan, he goes much beyond just the synopsis and delves deep into what a filmmaker has tried to say. In that perspective, one can comfortably term 'Cinema That Heals' as a single source for films that touch upon this point.

However, the bottom-line is whether the book makes for a comfortable read that manages to hold your interest right from its first to the last chapter. Well, you must have guessed the answer to that by now!